The Department of Biology at Carleton University has recently established an annual lecture series in Plant Biology in honour of Dr. Margaret McCully. 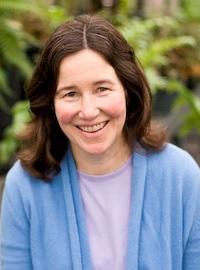 Dr. Lacey Samuels from the University of British Columbia.

Cannabis sativa L. (cannabis) flowers are consumed by humans for their psychoactive and medicinal properties. The flowers are covered in glandular trichomes, which produce cannabinoids, as well as fragrant and resinous terpenes. Attempts to elucidate the development of these glandular trichome types have lagged, due to the legal status of the plant, despite increasing acceptance of cannabis for medicinal and recreational use. Using classical histology, scanning and transmission electron microscopy, and two-photon fluorescence microscopy, we quantitatively tracked and modelled the developmental trajectory of the cannabis glandular trichomes. These data demonstrate that sessile trichome types on the flowers, which are defined by the absence of a conspicuous stalk, are a mixed population that is dominated by a subpopulation that will become stalked glandular trichomes. During development, stalked glands transiently share some characteristics with sessile glands on leaves that contain sesquiterpene-rich secretions stored in numerous, small oil droplets. The mature flower is dominated by stalked glandular trichomes, with strongly monoterpene-rich chemical profiles, and distinctive large metabolite droplets in the extracellular cavity where the resin is stored. In addition, the secondary metabolites in the trichomes were correlated with their transcriptomes. Together, our results demonstrate that classical definitions of sessile and stalked trichomes are inadequate to describe the dynamic populations of trichomes on developing cannabis flowers, and that metabolite composition and distribution are key features in the development of the abundant stalked glandular trichomes on mature flowers. The domination of this trichome population at maturity explains the distinctive smell associated with cannabis production.