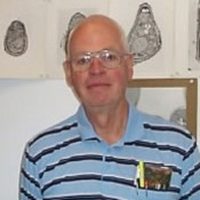 Listed in peer-reviewed article (Yeast 2002; 19: 745-772) as one of ten major contributors to yeast cytology in the second half of the twentieth century.

We use yeast as an experimental system because of the ease of using various approaches in cell biology, biochemistry, genetics, and molecular biology. The fission yeast Schizosaccharomyces pombe is emphasized in most of the work of this lab.

Studies on extensile growth and cell division have recently predominated but morphometric analysis and cell-cell interactions including flocculation and sexual differentiation have been studied. The growth habit of this organism seems intuitively to be very simple, the cell apparently doubling in length and dividing at its mid-point. However, many of the simplifying assumptions about its growth habit can be successfully challenged, as occasionally shown in this lab. For instance, division occurs at the volume mid-point rather than at the length mid-point. The notions that extensile growth is exponential and occurs only at the older end have been successfully challenged in many labs. The unnecessary assumption of balanced growth pertains only at very low cell concentrations. Some recent studies on extensile growth and cell division are tabulated below. The most recent study summarizes data contrary to the commonly held notion of actomyosin contractility at septation.