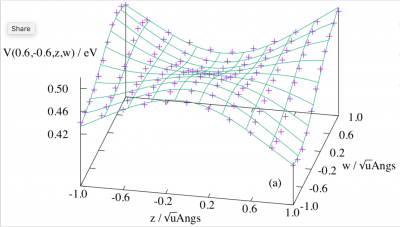 Singlet Fission: Singlet fission is a phenomenon in organic photovoltaics that splits one singlet exciton to two triplet excitons. With this potential exciton number doubling, the photoelectric conversion efficiency is enhanced. We use quantum chemistry and quantum dynamics methods to probe the mechanism of singlet fission and to design chromophores for singlet fission.

Microscopic Superfluidity: We perform quantum Monte Carlo simulation of molecular rotor embedded in nanoscale clusters of 4He and para-H2, and gain understanding of the superfluid response of the surrounding bosons (4He and para-H2) to the rotation of the molecule. We are especially interested in the emerging superfluid response as the symmetry of the rotor is lower. In this Figure, a SO2 molecule is surrounded by four para-H2 molecules. The pH2 density is represented by the green isosurface and one Feynman path configuration of the pH2 is represented by the black path. The pH2 exchange forms one path that contains all four pH2 molecules and the path winds around the SO2 molecule, resulting in superfluid response to the SO2 rotation. For more details about our work on microscopic superfluidity, please see J. Phys. Chem. Lett. 2013, 4, 18; J. Phys. Chem. Lett. 2013, 4, 2391; Rep. Prog. Phys. 2014, 77, 046601.

Shown in this figure are the σg (bonding) and πg (antibonding) orbitals of Tl2. Without spin-orbit coupling, the electronic configuration of Tl2 is σg2, with two electrons occupying the bonding orbital. The spin-orbit coupling transfers part of the two electrons to the πg orbital (through rotation, represented by the black curvy arrows) and reduces the bond strength.

Shown in the left two panels of this figure are the two degenerate e” orbitals of WF5, whose ground state electronic configuration is e”1. This partial occupation of degenerate orbitals is supposed to lead to the Jahn-Teller distortion, since each of the orbitals is not totally symmetric. However, spin-orbit coupling mixes these two orbitals and gives a totally symmetric distribution of electron density that maintains the D3h structure of WF5. For introduction and applications of natural spinors, please see J. Chem. Phys. 2011, 134, 214107; J. Chem. Theory Comput. 2011, 7, 2864; J. Chem. Theory Comput. 2012, 8, 3061. Shown in this figure are the radial distribution functions of the Au 5d orbital calculated using the Effective Core Potential (ECP), Model Core Potential (MCP), and All Electron (AE, the reference) methods. The correspondingly calculated orbital energies are shown in the unit eV and they are all close. In ECP, since the Pauli exclusion between the core and valence electrons is not explicitly treated, the 5d orbital has no nodal structure in the small radius region. MCP retains the nodal structure through including the core-valence Pauli exclusion in its Hamiltonian. With the proper nodal structure, the properties that are sensitive to the valence electronic structure at the nuclear vicinity can be accurately evaluated using their genuine operators. These properties include spin-orbit coupling (SOC), nuclear magnetic resonance chemical shift, etc. We have endeavoured to develop SOC-adapted MCPs, with the objective to facilitate relativistic quantum chemistry calculations. Our developed MCPs cover all p-block elements up to the 6p elements. For more details about our work in MCP, please see J. Chem. Phys. 2009, 130, 204107; J. Chem. Phys. 2009, 131, 124109; J. Chem. Phys. 2010, 132, 074102; J. Chem. Phys. 2010, 133, 114107.