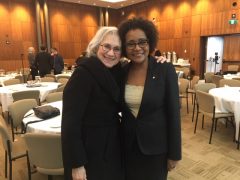 By Sheila Hurtig Robertson, Centre for Holocaust Education and Scholarship

Survivors, ambassadors, politicians, and representatives from 10 partner organizations, including the Centre for Holocaust Education and Scholarship (CHES), gathered in Ottawa on January 24th to commemorate the 75th anniversary of the liberation of Auschwitz-Birkenau.

Welcomed by Senators Donna Dasko and Marc Gold, and Jack Jedwab, CEO of the Association of Canadian Studies and a son of Holocaust survivors, the audience listened attentively as speaker after speaker paid poignant homage to the six million “silenced” victims of the Holocaust and warned of the current terrifying and unforeseen rise of antisemitism in many parts of the world, including Canada.

Senator Dasko welcomed dignitaries from Austria, Belgium, Bulgaria, Germany, Lithuania, Israel, Poland, Romania, Slovak Republic, and Ukraine. She reminded us of the horrific scene that awaited soldiers of the First Ukrainian Front as they entered Auschwitz: 648 corpses, more that 7,000 living skeletons, and six storehouses filled with hundreds of thousands of dresses and suits, 110,000 shoes, 3,800 suitcases, 12,000 pots and pans, 40 kilograms of glasses, and several tons of hair shaved from women’s heads. She mentioned a Soviet solider, who had already seen so many deaths, who said they had now “seen things we will never forget as long as we live.” And she thanked the survivors for bearing witness.

Senator Gold brought a message from Prime Minister Justin Trudeau who specifically mentioned “the scourge of antisemitism and hatred that is becoming all too common once again.” He wrote: “The murder of 6 million Jews by the brutal and antisemitic regime started with a slow erosion of rights, and the normalization of discrimination. We cannot permit the passage of time to diminish our resolve never to allow such horrors to happen again.”

Jack Jedwab spoke of his mother, Bella Gelbart, who survived Auschwitz and of his grandmother Fremet Gelbart, and his aunts Luba, Sara, and Chaya Jedwab, who did not. He told of his mother’s last moments with Fremet who, realizing death was imminent, urged her daughter to survive; somehow, she did. Years later Jack and his family were with Bella when she returned to Auschwitz, a visit that rekindled painful memories. He believes the world has not learned the lessons of Auschwitz, listing as proof the many genocidal massacres that have since occurred.

In his welcoming remarks, Steven Garten, Rabbi Emeritus of Temple Israel, spoke of having “an obligation to the victims of Auschwitz as antisemitism flares [today].” He noted that that “antisemitism thrives on the Internet where people encounter untruths in the privacy of their homes and so the lessons of Auschwitz are lost in the cacophony of gunshots.”

Eva Kuper, who survived as a hidden child and emigrated to Canada in 1949, was born in Warsaw at the onset of World War II and “survived by a series of miraculous events involving luck, coincidence, and the courage and faith of family members and strangers.” She explained that because “the chances of survival were so small, all such stories are improbable.” In her case, the actions of an aunt and a Roman Catholic nun, Sister Clara, enabled Eva’s survival. “Mine is a story of hope,” said the Montreal-based retired educator.”

Dr. Rebecca Wittman, an associate professor of history at the University of Toronto, studies the Holocaust and postwar Germany, trials of Nazi perpetrators and terrorists, and German legal history. Querying what it means to “Never Forget”, she said it is important to try to comprehend the Holocaust and attention must be paid to “apathy, indifference, and collaboration.” While noting the positive action of today’s Germany in placing a Holocaust memorial in the centre of Berlin, she added that it was decades before such actions happened. Instead, in the years following the war, only perpetrators who displayed “cruel, sadistic, and aberrant behaviour were prosecuted and not ‘order followers’”.

Jean-Paul Samputu is a Rwandan singer and songwriter and an Ambassador of Peace. Now living in Ottawa, the survivor of the Rwandan Genocide sang of healing and love and then spoke of the killing of his parents, two brothers, and a sister. His father was killed by a friend, whom Jean-Paul spent years tracking, only to spare his life following an epiphany. Together they organized a Forgiveness Campaign and today he preaches peace and reconciliation, not revenge.

Judy Young Drache, a child Holocaust survivor, retired civil servant, and member of CHES, touched on the “quiet, polite years of antisemitism” when Toronto law firms did not hire Jews, when Canada’s official policy towards Jewish refugees was “None is Too Many”, and many social clubs would not accept Jews as members as recently as the 1970s. She then turned to positive steps Canada has since taken, including The Report of the Special Committee on Hate Propaganda in Canada (https://www.worldcat.org/title/report-to-the-minister-of-justice-of-the-special-committee-on-hate-propaganda-in-canada/oclc/85755894 ), which was followed by a “significant body of anti-hate legislation and anti-racism policies” at home and internationally. Judy quoted Hon. Irwin Cotler who memorably said: “Indifference in the face of evil is acquiescence with evil itself; it is complicity with evil” and, from the Auschwitz Museum, “The Holocaust actually did not start from the gas chambers. This hatred gradually developed from words, stereotypes, and prejudice through legal exclusion, dehumanization, and escalating violence.” For her, the Holocaust “is not an event … It is part of me, it goes on, is never finished, and the older one gets, the more it weighs on one.”

One of Judy’s Positive Examples

Renowned Israeli British street artist Solomon Souza has painted a commemorative mural of Jewish football players and British POWs who were sent to Nazi camps, to mark Holocaust Remembrance Day on 27 January. The artwork is being displayed on a wall on the outside of the West Stand at Stamford Bridge and is part of Chelsea FC’s ‘Say No to Antisemitism’ campaign. The club has also adopted the International Holocaust Remembrance Alliance’s definition of antisemitism, the first sports team in the world to do so. http://www.israelnationalnews.com/News/News.aspx/274444

Dafina Savic is the founder and executive director of Romanpipe, a Montreal-based not-for-profit organization seeking to fight discrimination against Roma worldwide. She called for recognition of the Romany genocide through an

Act of Parliament because “Roma stories remain forgotten and untold and Roma history has been erased.”

The final speaker was Michaëlle Jean, the 27th Governor-General of Canada and the former Secretary-General of the Organisation international de la Francophonie. The lesson to be drawn from her wide-ranging, passionate speech is the need for “constant vigilance” and being on the alert for early warning signs through the use of words such as vermin and garbage to describe a people. “The target of such language is hate,” she said. “To do nothing would be to let the other side win by default.” And she fittingly quoted author James Baldwin: “The glorification of one race and the consequent debasement of another – or others – has been and always will be a recipe for murder.”

At their core, the lessons of the commemoration convey urgency: From the duty to remember comes the duty to react; educating the younger generation about the Holocaust is imperative; and, indifference to the difficulties befalling others can never be an option.