“Remembering the Holocaust, Conveying its Lessons”

A special commemorative event to mark the 75th Anniversary of the liberation of the Auschwitz‎-Birkenau concentration and extermination held under the co-presidency of Senator Marc Gold and Senator Donna Dasko.

CHES is pleased to be one of the cooperating partners of this event. 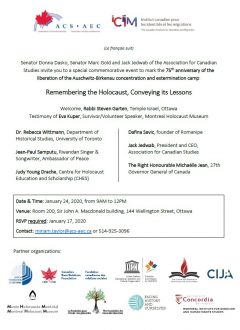 International Holocaust Remembrance Day (January 27th) commemorates the victims of the Holocaust. It was designated by the United Nations General Assembly on November 1, 2005 in a resolution that followed a special session held earlier that year during which the United Nations General Assembly marked the 60th anniversary of the liberation of the Nazi concentration camps and the end of the Holocaust.

On behalf of Library Archives Canada and our partners, we invite you to the Ottawa commemoration of this important day.

This important commemoration is proudly hosted by Library & Archives Canada in partnership with CIJA, Jewish Federation of Ottawa, The Centre for Holocaust Education & Scholarship, and the Wallenberg Citation Initiative.

Previous events from 2020 will be listed here after they’ve occurred.