Home / FASS News / Paige’s Blog – On learning, re: my life in pieces

Paige’s Blog – On learning, re: my life in pieces

Snip, snip, go the scissors of the Fates.

Sometimes, my life lies in pieces around me. Consider my apartment: books everywhere, post-it notes with lists of readings, essays to edit; literal pieces (of literature) splay my education languorously across minimal square footage. There is a papered materiality to studying English that I cannot escape. My schoolwork surrounds me in fragments. Loose paper, all my pens four-fifths out of ink.

I begin to think that this is how life works: perhaps it is that everything of import has been sent through a shredder and then lies around you, waiting for reassembly.

Near the end of reading week, I was standing in the Metropolitan Museum of Art, staring at Georges Seurat’s A Sunday on La Grande Jatte – you know the painting I mean, the Pointillist one, with the woman on the right side who has a pet monkey. I’ve liked it since I’ve known it, which dates to my art history class in second year. I never thought I would see it in real life. I don’t know what it is about the Met, but it pulls together disparate things. There I am, in 19th century European Paintings, reliving art history. Then, downstairs, to Greek and Roman art, where I find stelae from the Temple of Artemis at Sardis and the gymnasium at Pergamon, places I visited in a study abroad class with the Greek and Roman Studies department in Summer 2015. And so the windy day on the Pergamon acropolis is before me. 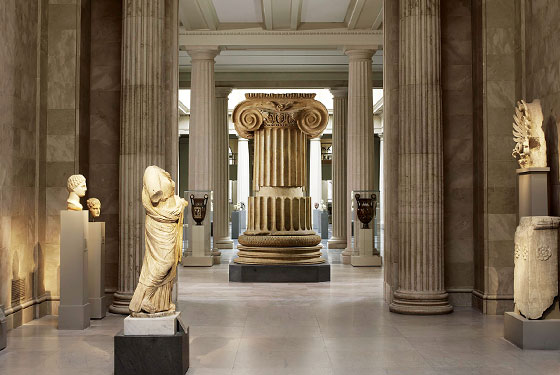 <br />Stelae from the Temple of Artemis at Sardis, ca. 300 B.C. Greek and Roman galleries at the Met. <em>(Photo: Metropolitan Museum of Art)</em>

How do you – suddenly and obliviously, and in a strange city no less – find yourself confronted by the missing pieces? In the case of the stelae, I mean that literally; they were pieces missing from the places I’d gone across the globe to see. Does it happen often that a poetic and cyclical pattern shapes your life? How do you ever find yourself in this position you’d never thought you’d be in, a position of ecstatic recognition and overwhelming privilege, as though the world literally revolves around you, for you?

When I write an essay, I have to wander around the space I occupy and find the scraps of paper on which I’ve written my thoughts – single words, exclamation points, long block quotations. I gather, compile, assess. This is the puzzle I’ve made for myself, whence the thesis emerges. I draw it out slowly, tease meaning, solve the mystery. Somehow, over the course of five years, my life has worked itself into something similarly cohesive, emergent, and true.

I blame my education, the thing that has taught me to un-puzzle the pieces and to puzzle them further; the thing that has inspired in me a desire to see. I’m not sure when I became willing to travel in spite of fear, when I put the desire to know more about the world over the desire to be comfortable and safe in my own home. Perhaps it’s been lying latent, but recently – in the rooms and halls of this university – the careful hands of brilliant teachers, the ideas and adventures bound up in pages and pages that have passed through my eyes/fingers/brain have drawn it out, teased the meaning out of me, begun to solve the endless mystery of my own life.