The Co-operative Education Office is pleased to announce the winners of the 2018 Carleton University Co-op Student and Employer of the Year Awards. The Co-op Awards are presented each year to recognize the outstanding achievements, contributions, and performance of our co-op students and their employers. Click an award name below to read about this year’s winner!

2018 Undergraduate Co-op Student of the Year 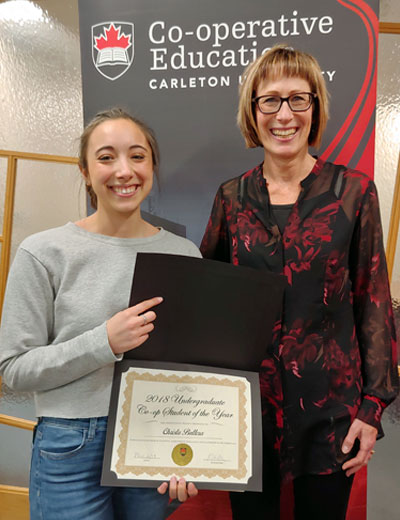 Congratulations to Christa Buttera, third-year Bachelor of Information Technology student in the Interactive, Multimedia and Design Program and winner of the 2018 Co-op Student of the Year Award. Buttera completed a twelve-month work term with the City of Ottawa, working as a Technical Graphic Designer at OC Transpo from January to December 2018.

2018 Graduate Co-op Student of the Year 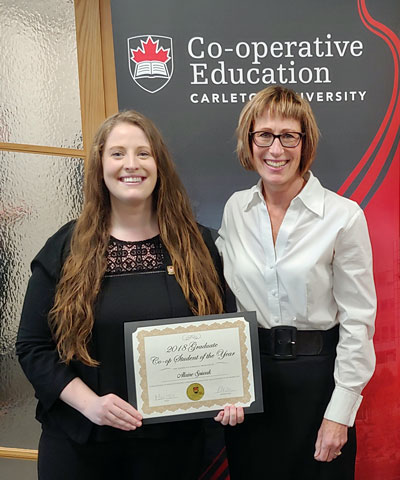 Alaine Spiwak, winner of the 2018 Graduate Student of the Year Award, with Kathleen Hickey, Manager of Co-operative Education.

Alaine Spiwak, a Master of Arts in International Affairs student, was awarded the 2018 Graduate Co-op Student of the Year Award. Spiwak completed an eight-month work term as a Junior Project Officer with CowaterSogema, a consulting firm which focuses on designing and implementing large-scale international development projects for donors such as Global Affairs Canada, the World Bank, and the European Union.

Spiwak was nominated by Cory Leblanc, Vice-President of CowaterSogema’s Public Financial Management and Accountability Team, for consistently exceeding expectations, for her contributions to CowaterSogema’s Business Development work, and for boosting the performance and functionality of the team.

“We work in what is often a very high stress environment and the importance of collaborative approaches, professionalism and high performance under significant pressure and stress cannot be understated. Alaine has proven highly capable of working in a team environment and has certainly brought improvements to the morale and cohesiveness of the team. Her client service approach is superb, and I have come to rely on her regularly to engage with new consultants and represent CowaterSogema,” said Leblanc.

When nominating Spiwak for Co-op Student of the Year, Leblanc wrote that one of Alaine’s most notable accomplishments was leading the remote liaison and discussions with CowaterSogema’s large team of consultants for a bid on a project with the Supreme Audit Institution in Ethiopia. CowaterSogema was successful in winning this project, valued at over 1.5 million CAD and without Spiwak’s efforts it is far less likely they would have been able to submit a successful bid.

Leblanc ended his letter of support for Spiwak’s nomination by saying, “With Alaine having exceeded expectations in her role with us and having had the opportunity to see her rapidly develop her skills relative to our work, we hope to continue working with her once she graduates from Carleton and are very much encouraged to engage co-op students in future.” 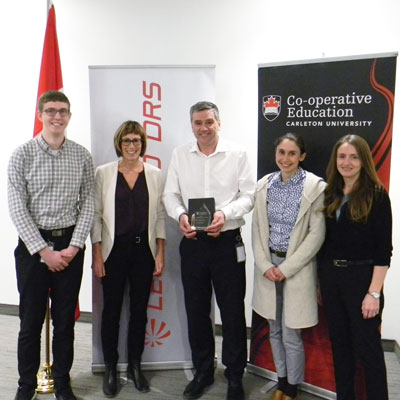 Both students praised Young-Davies and the DRS team for creating a welcoming and supportive work environment, connecting them with a strong network of mentors, and for providing them with the opportunity to develop hands-on skills by working through real-life engineering problems.

In her nomination form, Kemp praised the workplace culture at Leonardo DRS, specifically the emphasis on providing co-op students with access to mentors and peers.

“As co-op students, it is crucial for us to have a supportive team that is capable of taking time out of their day to offer guidance. At Leonardo DRS, a co-op student is assigned a mentor within their department on their first day of work. This mentor becomes someone the student knows well and feels confident approaching for assistance. I often discuss and have a brainstorm session with my mentor when I am working on a design task, as there is often some knowledge-sharing that can save me a lot of time when confronted with more difficult tasks,” wrote Kemp in her letter of support.

Devon Verge has been working at Leonardo DRS since January 2018 and will continue in his position as a Co-Op Software Engineering Student throughout the summer 2019 work term. In his letter of support, Verge included how his managers at Leonardo DRS placed a large amount of trust in himself and his fellow co-op students to complete their work and assigned tasks with little supervision.

“At Leonardo DRS, co-op students were tasked with projects that are challenging and force them to solve design-related problems on a daily basis. When there’s a problem, our managers gave us the freedom to figure out how to fix it. They encouraged us to try new things to get better results, while providing just enough guidance to make sure we weren’t heading in the wrong direction,” Verge said. 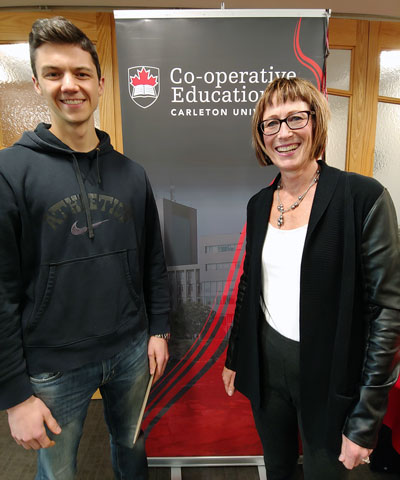 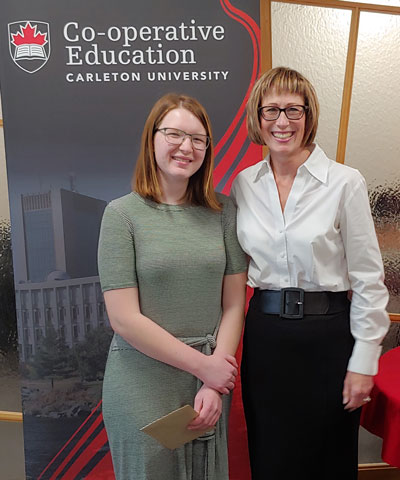 Third-year Bachelor of Public Affairs and Policy Management student, Sarah Falkowsky, and Master of Arts in Sustainable Energy Policy student, John McNally, both received honourable mentions for Co-op Student of the Year for their significant contributions to their project outcomes throughout their respective co-op work terms.

John McNally worked as a Policy Analyst within the Cross Sectoral Energy Division (CSED) at Environment and Climate Change Canada (ECCC) throughout the summer 2018 work term and was nominated by his supervisor, Christopher Ling, Policy Analyst within the Energy and Transportation Directorate of ECCC, for consistently exceeding the original expectations laid out for his role.

Some of McNally’s most notable moments throughout his work term at ECCC included becoming the first co-op student in the history of the division to have their research presented to the Assistant Deputy Minister and preparing a briefing note on Ontario’s environmental policies for the Minister that was requested twenty minutes before it was due.

“He was able to complete the deliverable on time and make multiple rounds of edits with the note being given to the Minister for a visit at the Ontario provincial government that afternoon,” Ling wrote in his nomination form, “John’s dedication and work ethic made him a dependable and valued member of the CSED team. His work extended to supporting other members of the division when responding to urgent requests with quick turn-around periods and his efforts were noticed and lauded within the division.”

Sarah Falkowsky completed a four-month work term as a Program and Policy Review Coordinator at the Ottawa Food Bank (OFB). Natalie Spooner-Bourgogne, Director of Programs and Planning within the OFB, nominated Falkowsky for Co-op Student of the Year. In her nomination letter, Spooner-Bourgogne mentioned that the workload and demands of Sarah’s role were substantial, requiring strong critical thinking, interpersonal, communication, negotiation and time management skills and Sarah brought all these skills and more to the position during the summer of 2018.

The primary focus of Falkowsky’s work term was to review After-4, an OFB program that provides food to community agencies that distribute after-school snacks to children. The goal of the review was to align the program with the new OFB strategic plan by improving access to healthy food.

“Sarah was exceptional, providing significant and long-lasting contributions to the organization. Sarah’s well-researched recommendations regarding After-4 menu changes saved the OFB $15,500 annually and redirected the substantial savings to purchase a specific inventory of healthier food. Her work constitutes a significant contribution as the new healthier food options are critical to the well-being of those served,” Spooner-Bourgogne wrote in her nomination form.

Students nominated for the Co-op Student of the Year Award are recognized by both their employers and the Carleton Co-op office for being strong ambassadors for the Carleton Co-op Program and McNally and Falkowsky are no exception. The nomination forms for both students included that their respective organizations will focus on hiring more Carleton co-op students in the future as a direct result of Falkowsky’s and McNally’s achievements and contributions in the workplace.

Congratulations to Shawn Janssens, Senior Manager of Software Development at Ciena. Janssens received an honourable mention for 2018 Co-op Employer of the Year after being nominated by co-op student Thao-Tran Le-Phuong, a fourth-year student in the Computer Systems Engineering Program.

Le-Phuong praised Janssens’ tireless efforts to create optimal experiences for her and other co-op students — from assigning stimulating and challenging projects that develop relevant, industry-related skills, to coordinating mentorship opportunities, to organizing events and activities that foster engagement and bonding with colleagues.