The Co-operative Education Office is pleased to announce the winners of the 2019 Carleton University Co-op Student and Employer of the Year Awards. The Co-op Awards are presented each year to recognize the outstanding achievements, contributions, and performance of our co-op students and their employers. Click an award name below to read about this year’s winner!

2019 Undergraduate Co-op Student of the Year

Congratulations to Johanna Whitehead, fourth-year Bachelor of Engineering in Architectural Conservation and Sustainability student, and winner of the 2019 Co-op Student of the Year Award. Whitehead is completing a 16-month work term, which began in May 2019, as an Intern Engineer at Roney Engineering, a specialized structural engineering firm based in Kingston, Ontario.

Whitehead was nominated by Chris Roney, her direct supervisor and President of Roney Engineering, for her exceptional performance and capabilities demonstrated throughout her work term.

In his nomination form Roney included one of Whitehead’s most notable accomplishments was the design of a unique accessibility ramp for a historical building at Queen’s University. Whitehead dedicated time, working through her lunch and past normal business hours, to devise a successful design and to ensure the client’s needs were fully met. As a direct result of her initiative and dedication, the client was extremely pleased and the project led to additional work opportunities for Roney Engineering.

“[Johanna] has, on her own and with very minimal guidance, dramatically expanded our firm’s services in areas such as advanced renderings of buildings and development sites, vehicle path of travel analysis, site plan analysis and design, and architectural conservation. These are services that we were not in a position to offer to our clients until Ms. Whitehead joined our firm.”

Roney ended his letter of support for Whitehead’s nomination by saying, “I have never encountered a more gifted young future engineer than Johanna. She has definitely inspired me to hire other co-op students from Carleton in the future.”

2019 Graduate Co-op Student of the Year

Jenna Carter, a Master of Arts in International Affairs student, was awarded the 2019 Graduate Co-op Student of the Year Award. Carter completed two work terms at Global Affairs Canada from May to December 2018 and was nominated for her work as an Intern at the Permanent Mission of Canada to the United Nations. 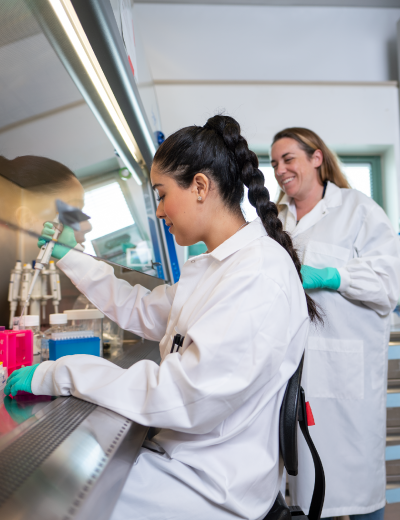 Lindsay Beaton-Green, Research Scientist for the Consumer and Clinical Radiation Protection Bureau at Health Canada, is the recipient of the 2019 Co-op Employer of the Year Award.

Cuadros Sanchez nominated Beaton-Green for creating a supportive work environment and providing her with valuable, hands-on experience and the opportunity to develop a range of technical and interpersonal skills.

“From making a protocol to executing the experiment to presenting the results, I always got the support I needed and she [Beaton-Green] was always open to give me feedback when I asked for it,” said Cuadros Sanchez. “I got to learn something new every day, which it was challenging but rewarding at the same time.”

Through her work with Beaton-Green, Cuadros Sanchez was given the opportunity to network with colleagues and student peers within Health Canada, attend her first scientific conference, hosted by the Canadian Radiation Protection Association, and assist in the planning of inter-laboratory experiments for a research project at Columbia University. In her nomination form Cuadros Sanchez thanked Beaton-Green for encouraging and allowing her to pursue these opportunities for personal and professional growth.

“She inspires everyone around her to be a better professional, student, and person,” said Cuadros Sanchez.

Cuadros Sanchez will be returning to her role as Research Assistant to Beaton-Green for the summer 2020 work term.

Katlin Massie, a fourth-year Bachelor of Economics student, received an honourable mention for Co-op Student of the Year for her eight-month work term as a Talent Acquisition Coordinator at ADGA Group.

When nominating Massie for Co-op Student of the Year, Dearman wrote that one of Katlin’s most notable accomplishments was making sure things ran smoothly while the department was experiencing heavy employee turnover in the middle of her work term.

“She was the first person to step in and really go above and beyond her regular tasks by becoming the main representative to one of our largest companies, while also taking on 50% of the recruitment and on-boarding of internal employees. Each day, Katlin held meetings for VPs and Directors, discussing strategy and reviewing financial impacts,” said Dearman.

“The feedback from those involved was extraordinary and it shocked me to view someone of that age handling the stress and pressure with such maturity and professionalism.”

Dearman ended his letter of support by saying, “[Katlin] truly set the bar at impossible heights for future co-ops. She saved the company a considerable amount of money in her efforts while also contributing to the growth of company culture that will have residual effects for years to come.”