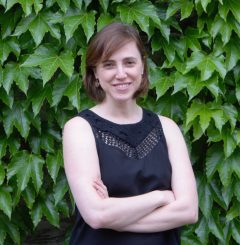 Joanna Dafoe is an advocate for ambitious climate law and policy and is committed to climate leadership in both the public and private sector. She is an instructor of international climate law at Queen’s University Faculty of Law, and currently serves as the National Director of Climate Change with the Insurance Bureau of Canada. Previously, Joanna was the Senior Advisor to Canada’s Ambassador for Climate Change with the Federal Government. She received her JD from Yale Law School, as well as graduate degrees in business and environmental science from Yale.

Most scholarship on climate law is focused on international treaty law. This includes the United Nations Framework Convention on Climate Change (UNFCCC, 1992) and its subsequent international agreements: including the Kyoto Protocol (1997) and the Paris Agreement (2015). While these international agreements have an important role to play in climate mitigation, they have limitations. For example, the 2018 IPCC Special Report concluded that the world is not on track to reach its target of limiting global warming to 1.5°C. Furthermore, the UNEP Emissions Gap Report released in 2018 demonstrated that even if all countries follow through with their climate pledges, this would still not limit warming to desired levels (1.5°C).

Despite its prevalence in contemporary discourses, international treaty law is not the only sphere of climate law. A second more recent but quickly-growing sphere of climate law consists of litigation against governments. In the last five years, several of these cases have been brought forward in countries across Europe, North and South America, Asia, and the Pacific (over 1440 cases brought forward to date). These cases are founded in human rights and states’ constitutional obligation to protect their citizens. A notable example of one such case was filed in 2015: Urgenda Foundation v. State of the Netherlands. In this case, a group of citizens and an environmental group sued the Dutch government for insufficient action regarding climate change. The courts ultimately ruled against the Dutch government, stating that “the State has done too little to prevent dangerous climate change and is doing too little to catch up.”1 In terms of tangible actions, the courts ordered the Dutch government to reduce emissions to 25% below 1990 levels by 2020 (as opposed to its previous target of 17% below 1990 levels). After several appeals and cross-appeals, the Supreme Court upheld this ruling in December of 2019.

This case in the Netherlands was the first court decision in the world which ordered a state to reduce emissions for a reason other than statutory mandate, and it had ripple effects on climate litigation around the world. Following the initial ruling in 2015, there was a notable increase in climate litigation in other countries (36 lawsuits for human rights violations under climate change), many of which referenced the Dutch ruling. While not all were successful, this trend towards recognizing the human rights implications of climate change and the role that governments have in mitigation efforts is promising. These cases include: Juliana, et al. v. United States of America, et al.; Environnement Jeunesse v. AG of Canada; La Rose v. Her Majesty the Queen; and, most recently, Do-Hyun Kim et al. v. South Korea (filed in March 2020).

The third aspect of climate law which has emerged is litigation against private actors. Up until 2015, this primarily consisted of tort or public nuisance cases which were largely unsuccessful. One example of this is the Native Village of Kivalina v. ExxonMobil Corp case, which was filed in 2008. Kivalina, a village in Norwest Alaska, sued ExxonMobil for the destruction caused by flooding as a result of climate change. The case was dismissed by the district court on the basis that this was a political rather than legal issue. Subsequent appeals also did not lead to any action.

However, trends in litigation changed after 2015. Four aspects were key to this change: new revelations and evidence in attribution science and carbon accounting, a willingness to expand the legal standard of causation, and new definitions of climate risk. These new definitions of climate risk include a recognition of the physical risks (acute and chronic) and the transition risks (policy and legal, technical, market, and reputational).

Within this post-2015 paradigm of renewed climate litigation against private actors, cases have been brought forward for several reasons. These include compensation for damages, human rights, and obligations to disclose climate risks. Despite the increase in claims against private actors, the proceedings remain costly and it continues to be a challenge for courts to fashion remedies.

Ultimately, although climate litigation can catalyze change, it is not sufficient. Effectively addressing climate change will require profound structural changes across the world’s systems, including its economic, financial, and energy system. However, these trends in climate law demonstrate that while questions and challenges remain, litigation can be a useful tool for climate action.

Q: At the beginning of your presentation, you discussed the Kyoto Protocol and the Paris Agreement. What is the difference between these two international agreements?

A: Kyoto was a legally-binding top-down agreement. Because it was structured like this, countries had concerns surrounding fairness and high costs. When the Paris Agreement was negotiated years later, countries were able to make their own targets (nationally determined contributions, NDCs) and it was not made to be legally binding. The hope is that pressure from other countries will promote compliance and accountability.

Q: What do you think the main challenges and opportunities in climate action are? Where can we make a difference?

A: Reports released by various international bodies like the IPCC can do a lot to catalyze action, but a key part of promoting action on climate change is ‘following the carbon’ and seeing who and what are at the source of the climate problem.

Q: Do you imagine that, as the climate crisis deepens, the UN will play a role in sanctioning governments? And if so, would this not simply lead to more withdrawals from international climate treaties like the Paris Agreement?

A: The UN will likely play an increasingly important role in global climate action coordination moving forward. But it’s important to note that peer governments will have a huge influence on their neighbouring countries as well. For example, border carbon adjustments are already being discussed to address the issue of cross-border carbon transfer. There will also be reputational consequences if countries do not abide by climate rules.

Q: What do you think the implications will be if the Supreme Court of Canada rules the national price on carbon constitutional?

A: This will help shift the climate pricing discussion in Canada away from being viewed as legally unsubstantiated or ideological. It could provide some closure to the ongoing political contest surrounding this issue.

Q: You stated that following the carbon was important. But what about following the money? For example, shareholders are now taking companies to court for not accounting for climate change. Since the legal system can be slow, could this be a more effective means of promoting action?

A: Shareholders and individual consumers also have an important role to play in addressing climate change. But courts and our legal system are also part of the picture and will also contribute to the creation of a more sustainable future.