Carleton has historically had a strong economics department. It is firmly among the top ten such departments in Canadian universities and houses many researchers who publish in the top peer-reviewed economics journals in the world. Continuation and growth of this historic strength is evidenced by the Department’s performance in SSHRC funding decisions in recent years, which included in one two-year period successful proposals in the “International Opportunities Fund,” “Public Outreach Grant: Open Category,” “Insight Development Grant,” and “Aid to Research Workshops and Conferences in Canada” competitions as well as six successful Standard Research Grant proposals. These ten successes involved about a third of the Department’s regular faculty complement.

The Department of Economics has for many years put on a very active seminar series involving invited speakers doing leading-edge research in a wide variety of fields. Since 2007–08, such seminars have been held on a more-than-weekly basis throughout the Fall-Winter session. Visits by “big-name” researchers in association with this series have not been uncommon. Olivier Blanchard of MIT, Jagdish Bhagwati of Columbia University, and Nobel laureate Robert Mundell are three of the high-prestige researchers that the Department has hosted since 1998.

In the fall of 2007, the Department organized and hosted the Canadian Macroeconomic Study Group (CMSG) Meetings for the first time since their inception in 1986. Leading macroeconomists from across Canada and the United States delivered papers at this prestigious scholarly and policy-oriented event on issues ranging from the housing and credit markets, to inflation and exchange rates, to technology shocks. It was by all accounts a big success and served to raise Carleton’s profile as a centre for macroeconomic research.

The Department has subsequently built on this success by establishing a new research centre in recognition of the fact that it is one of Canada’s leading places of expertise and innovation in monetary and financial economics. The “Centre for Monetary and Financial Economics” (CMFE) draws upon the critical mass of Economics faculty—across all career stages and representing about half the Department—who are leading-edge scholars in this very broad field. It has also been key in attracting three former Deputy Governors of the Bank of Canada to Carleton; namely, Drs. Charles Freedman and David Longworth and Paul Jenkins. Dr. Freedman in particular has been a great asset to the CMFE, serving as one of its founding Co-Directors as well as the co-organizer responsible for pulling together the impressive line-up of presenters, speakers, and discussants for its first-ever major conference (on “Economic and Financial Crisis: Lessons from the Past and Reforms for the Future”) in May 2010.

In the fall of 2009, the Department organized and hosted the Canadian Econometrics Study Group (CESG) meeting for the second time since its inception in 1984 (the first time was in September 1992). Eminent econometricians from across Canada and around the world presented cutting-edge research across the spectrum of their field. The CESG is a unique forum that raises awareness of the most current econometric research, fosters collaborations, and stimulates further research. The 2009 edition was no exception.

The Department’s teaching evaluations are above the mean for both the Faculty of Public Affairs and for the University as a whole. Several of our instructors have received awards for the excellence of their teaching. Most notable among these is Professor Simon Power who won three such awards in 2007–08 alone, including a Carleton University Students’ Association (CUSA) Teaching Excellence Award, an Ontario Confederation of University Faculty Associations (OCUFA) award, and a Leadership in Faculty Teaching (LIFT) award. More recently, Professor Power won a 2010 Faculty of Public Affairs (FPA) Teaching Award and a 2009–10 CUSA Teaching Excellence Award and contract instructor Sangita Dubey was a TVO 2010 Best Lecturer nominee and won a 2011 FPA Teaching Excellence Award.

A few years after the turn of the century, the Department’s overall program enrollment level became the third highest in Ontario, three-quarters and four-fifths the size of the economics enrollment levels of York and the University of Toronto, respectively, and more than double that of (fifth-highest) Queen’s, which has a regular faculty complement in economics that is close in size to Carleton’s. The current economics enrollment level at Carleton of roughly 900 students is three to four times as high as is was in the mid-1990s.

The Department has been housed on the eighth floor of the Loeb Building from the time of its opening in 1967. Designed by vanguard modernist Ottawa architect Jim Strutt (1924–2008), the intended slowing down of movement within the interior was achieved by breaking up the building into blocks, each with its own elevator and/or staircase and small lobby, and connected to one another by windowed walkways at the third floor and above. The building was featured in contemporary Ottawa artist Adrian Göllner’s “Modern U.”—a self-guided walking tour of Carleton hosted by the University Art Gallery from 22 September to 19 October 2003. A virtual version of the tour continues to be available at cuag.ca/online/modernu/ to all who are interested in Carleton’s architectural heritage. 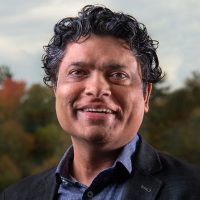 Full Professor, Chair and Co-Director of the CMFE