They call it ‘bootcamp,’ and for good reason. The mandatory reporting skills course for all new Master of Journalism students at Carleton is a gruelling crash course in the fundamentals of being a news reporter. Practicing everything from interviews to news writing, the students meet for eight hours every Tuesday and Friday for their ‘bootcamp’ class, which is broken down into lectures and skill development workshops.

This past fall, veteran reporters Allan Thompson (Toronto Star) and Janice Tibbetts (Postmedia News) taught the course, and when Thompson realized the U.S. federal election would be taking place on a Tuesday – a bootcamp day – he saw it as a prime opportunity to give students authentic journalistic experience.

“It seemed crazy to be sitting in a classroom in Ottawa when we could be in the U.S. covering the election,’’ says Thompson.

He pitched the idea to the Discovery Centre and received funding to support his experiential learning endeavor. Thompson then went on a brief “reconnaissance mission” to scope out interview subjects and story lines and, perhaps most important, find a hotel that would accommodate his 19 students in Ogdensburg, New York, a tiny town tucked just across the U.S. border.

While Thompson made the necessary travel arrangements, the students made some preparations of their own. The class took a “divide and conquer” approach, researching and setting up interviews throughout St. Lawrence County, with some readying to visit the local high school to speak with first-time voters.

Thompson and his class left Ottawa early in the morning on November 8 and made their way to the gymnasium of an old schoolhouse-turned-hotel, which they converted into their “headquarters,” where students would return throughout the day to file stories and touch-base with their instructors. Once the professors and teaching assistant had edited the students’ work, it was uploaded to a WordPress site crafted exclusively for the exercise. The website was updated regularly with written articles, sound clips, photos, and podcasts submitted by the students throughout the day. 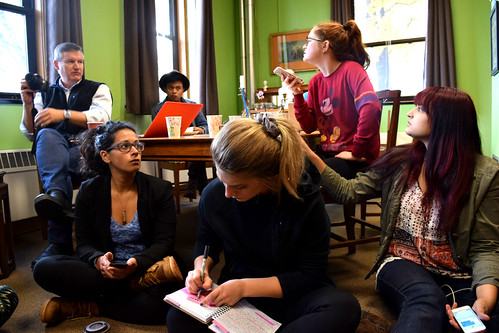 “How are voters in upstate NY feeling? St. Lawrence County folks say they feel ‘doomed’, ‘between two evils’, and ‘without hope’,” tweeted Maureen McEwan, who spent part of her day amongst young voters at a university in Canton, NY.

One group of students decided to report on the Democrats in Potsdam, a neighbouring town, while some of their peers visited the Republican headquarters as the results began pouring in.

Thompson says his aim was to encourage the class to exercise some of the skills they had been developing in the course as well as gain real-life life experience “reporting on the ground.” The class was fully immersed in the world of journalism as they were challenged to seek out stories worth telling, meet deadlines, and overcome personal challenges in an effort to submit their work.

Shauna McGinn, who was interviewed on location by CBC’s Andrew Nichols, a Carleton graduate, states that in addition to gaining true reporting experience, she can look back and think, “we were there on one of the most historical days in recent history.”

Her sentiments are shared by her peer Matthew Olson, who produced a series of podcasts along with fellow classmate Jordan Steinhauer.

“Nothing that you can do in class can compare to what it’s like to be out in the field working on a story,” he says.

The complete body of work produced by the first-year graduate students can be viewed at americavotes2016.cusjc.ca.