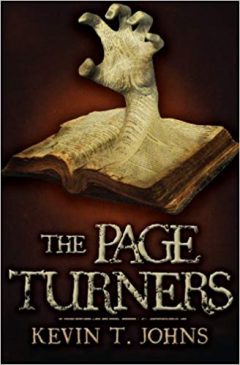 Critics have described The Pager Turners as a “crimson-stained love letter to genre fiction.”

The book provides thrilling horror for young adult readers, while tackling family breakdown, bullying, parental abuse, and the challenges of growing up in a small Canadian town.

As he (and many others), eagerly wait for The Page Turners to hit shelves on November 30th, Johns took a moment to reflect on his time in the English Department at Carleton University, and how it helped him prepare for life as a professional author, and in his successful career at Aboriginal Affairs and Northern Development Canada.

“I’m extremely excited to see my debut novel in print. This was the sort of achievement I dreamed about as an undergraduate studying literature at Carleton University, almost a decade ago,” explains Johns.

“I really love that Carleton’s English program has not only equipped me with the skills to follow my artistic dreams in the literary world, but has also provided me with a more practical analysis-based skill-set that I can consistently draw from at my day job as a federal public servant.”

The Page Turners tells the story of three teenagers who, after discovering a book of magic spells, accidently release a fictional killer into the real world. While the novel contains all the grisly thrills one would expect from such a tale, some of the narrative’s most effective moments of horror come in the form of alcoholic parents, disinterested teachers, cruel peers, and authority figures who refuse to aid the teens in their time of need.

“I’m a child of divorced parents, and I spent my teen years living in a small town,” says Johns. “I was this punk rock kid who felt completely alienated from the rural environment around me, but I found solace in horror, fantasy, and science fiction. With The Page Turners, I hoped to craft a novel that would speak to teens going through the same issues I dealt with in my adolescent years, and provide them with the form of comfort that I found in the stories that I read.”

Johns’ ability to write fantastic scenarios that read as entirely plausible and relatable is a skill that he honed during his time at Carleton. In English, he learned how to disseminate his profound interest and understanding of popular culture, the human condition, and their influence on one another. Many of his former CU professors, including Associate Professor in the Department of English, Brian Johnson, recognized that he had a knack for this style of storytelling.

“I was lucky enough to get to know Kevin when I supervised his challenging and original research paper on the Marvel Comics superheroes, Daredevil and Echo, back when he was a Master’s student in the English Department in 2005,” said Johnson.

“He was the kind of guy whose knowledge of popular culture was encyclopedic and whose unvarnished enthusiasm for its many forms was contagious. I learned a great deal from our many talks about comics, Buffy, and Twin Peaks. Moreover, Kevin’s knowledge of and affection for popular culture were always matched by his sharp insights into serious social and philosophical themes; I’m very excited to read his debut novel, which sounds like a perfect fusion of Kevin’s enviable strengths as a writer, thinker, and storyteller.”

“Kevin was one of those students a teacher is always thankful to have in class—smart, engaged, energetic, articulate, gracious, hardworking, and collegial. His achievements in writing and publishing come as no surprise, and we are very proud to claim him as one of our graduates!”

The Page Turners, will be released in paperback and e-book from Cat & Bean Publishing on Saturday, November 30, 2013.  It is the first book in a series that www.horror-writers.net has described as “must read,” and is available for purchase from www.Amazon.com.

Kevin T. Johns grew up in a small Ontario town, reading comic books, watching horror movies, and playing guitar in local punk rock bands. After studying film and English literature at Carleton University, he co-founded an online arts-and-culture magazine, where he was a contributing writer and senior editor for several years. He now lives in Ottawa with his wife and two daughters. The Page Turners is his debut novel.