Home / Events / An introduction spurred by tornadoes and tuition

An introduction spurred by tornadoes and tuition 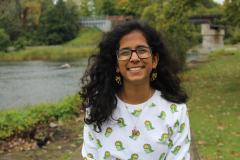 If you met me in person, I might say, “Hi, I’m Manahil.” You’d reply, “Hi, I’m ______.” I might try to convince you to join the English Literature Society or In/Words. But we’re not meeting in person. Instead, I get to talk about myself.

My name is Manahil, and I’m an English major at Carleton. I’ll be honest – I don’t know what year I’m in at this point. I spent the last year – what should have been my third year – doing co-op. I took some third-year courses the summer before this one, and although I have third-year standing, I have had decent luck convincing professors to let me into fourth-year seminars (this probably doesn’t work as well if you’re a first-year student).

I have had an interesting year, to say the least. I worked two jobs that did not involve me slicing my finger on a mandolin. I was briefly free of the horrors of paying tuition. I published some work on a government platform. I published my first chapbook. I have written thousands upon thousands of words on wedding planning. I travelled to Vancouver by train. I became a Canadian citizen. I missed the second week of my third (?) year at Carleton for a family reunion.

And now I am (hopefully) back in Ottawa to stay. After not being in school for almost a full year, coming back to academia is rough. I feel like I am already behind on readings, just barely scrambling through assignments the morning of – a far cry from my first-year self that started writing papers weeks before they were due. I cannot rewrap my head around academic language – both my co-op placements involved writing as simply as possible.

Despite this, I am glad to be back. One of the fixtures of my first and second years at Carleton was the weekly Writer’s Circle sponsored by the English Literature Society. My weekly attendance dropped to “monthly” and then dropped to “rarely” because I could not reach the circle in time after work.

Now I can rejoin the group of people I have grown close to over my time in English. These people have helped my writing grow over the years. I brought some of the earliest versions of the poems that are now in my chapbook to the circle. After my chapbook was published, one of the past co-presidents contacted me, saying she wanted to buy my chapbook. I am filled with joy at the way this group continues to support me so unconditionally. This fall, I will see one of the members publish her first novel (!).

Perhaps another reason I feel so at home in the English Department is the professors. Whether it is running into them at Black Squirrel Books or on a bike path in Vanier, English profs are dedicated, compassionate, friendly, and so on. (Disclaimer: I don’t know if professors read the Life in English blog as I write this.)

Being an English student at Carleton is more than reading Shakespeare and writing essays. It is internally cursing people who take the elevator in Dunton Tower to the third floor. It is wondering whether you can find your class in Mackenzie today. It is wondering why every event seems to happen on a Thursday when you have class.

Being an English student at Carleton is being home.