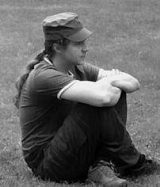 On November 22, 2016, Carleton graduate Aaron Mills returned to Ottawa to receive the prestigious SSHRC (Social Sciences and Humanities Research Council) Talent Award for his research on the constitutionalism of Anishinaabe legal traditions, the relationship (or non-relationship) of these traditions to Canadian law, and the impact that knowledge and understanding of Indigenous legal traditions could have on dialogues of reconciliation within the Canadian legal system and among Canadians generally.

Aaron, who is himself a Bear Clan Anishinaabe, completed an Honours B.A. in Philosophy and English with Highest Honours at Carleton in 2005. “I think very highly of both the critical and the analytical training I got at Carleton,” Aaron commented. He credits his studies in post-colonial theory with Sukeshi Kamra and the intellectual and argumentative rigour imposed on him by Pat Whiting as being some of the seeds that have grown into his pursuit of new, non-violent, and respectful ways to identify and redress the causes of the badly damaged relationship between Canada’s Indigenous peoples and settlers on issues including environmental justice and natural resources development.

After graduating from Carleton and a year of travelling and writing, Aaron completed his law degree at the University of Toronto. In 2012, on a Fulbright Scholarship, he earned an LLM at Yale Law School, and currently, as a Vanier Scholar and a Trudeau Foundation scholar, he is pursuing his PhD at the University of Victoria.

The SSHRC Talent Award is given annually to one Canadian doctoral student or postdoctoral fellow whose research “brings forward ideas that help us understand and improve the world around us.” The $50,000 award will help Aaron complete his doctoral research and make the world a better place.

Read an abstract of Aaron’s publication in the McGill Law Journal at http://lawjournal.mcgill.ca/userfiles/other/80818-Mills_abs.pdf