Along with William E. Engel (University of the South: Sewanee) and Rory Loughnane (University of Kent, UK), Professor Grant Williams is organizing a special interdisciplinary symposium “Memory and Mortality in Renaissance England” at the Warburg Institute, University of London on Friday, 17 May 2019. In the early modern period, the faithful were instructed not only to remember their own mortality, but also to be mindful of what occurs at the moment of death. Fear and doubt, the slow cessation of life on this earth, the separation from those still living, and the prospect of an after-life all contributed to what was to be recalled and kept in mind on a daily basis—shaping one’s activities, impacting one’s social relations, and influencing one’s moral calculus.

This one-day international symposium takes this matrix of interrelated concepts—of memory, of mortality, of remembrance—to discuss the various ways in which the living conceived and remembered their debts to the dying, the dead, and death.

The symposium is planned as a launch of two major collaborative research projects. The first is a new anthology provisionally entitled The Death Arts in Renaissance England (a companion volume to the organizers’ earlier The Memory Arts in Renaissance England [Cambridge, 2016]). The second is a new handbook volume of original essays (in part drawing on the work of the Warburg symposium participants) with the working title Memory and Mortality in Renaissance England. The goal of the symposium is to bring together leading scholars to reflect upon the findings and goals of past research and to discuss pathways forward for current and future generations of scholars working in the interrelated fields of early modern memory studies and death studies. The event is free and open to all but please book now to give the organizers a sense of numbers. 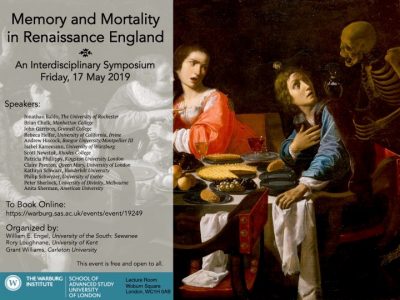