The Department of English and the Creative Writing Concentration are pleased to announce the winners of the 2019-2020 Flash Fiction Competition.

First Prize was awarded to Cossette Penner-Oliviera for her story “Monochrome.”

Second Prizes were awarded to both Sarah Waddington for her piece “Bloodstains Mistaken for Poppies” and Dana Foley for her story “Change is a Song.”

Thank you to all the writers who submitted their work to the competition. Thank you also to Kagiso Lesego Molope for adjudicating this competition. There were so many excellent submissions, making for difficult final decisions.

Please enjoy reading the work and bios of our winners, posted here. 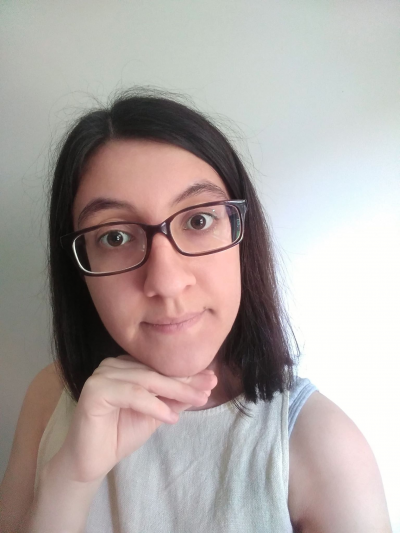 Cossette Penner-Olivera is a Peruvian-Canadian student pursuing a Master’s in English at Carleton. Like any self-respecting author, she drinks a little too much coffee, and her hobbies include cooking, writing, and memorising musicals by heart. Though not directly biographical, “Monochrome” was written as a personal piece, trying to imagine the cultural estrangement that immigrants like her mother and grandmother might have experienced upon arriving in Canada. It was also written as a love letter to her Latinx heritage (not to mention Peruvian cuisine). 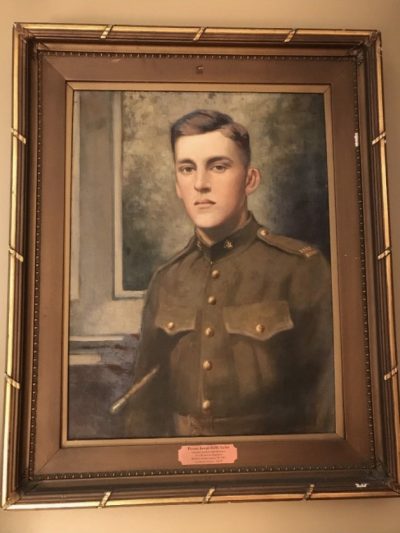 Sarah Waddington: I am a second-year English major, and this piece is based on the romanticization of war. My great uncle was underage when he was enlisted in World War Two, and he was killed in the battle. This poem is dedicated to him and to all the soldiers who have lost their lives for a glorified war.

Do not stand with your calm heads bowed, your hands relaxed, hanging by your thighs.

Do not recite that god forsaken chant about poppies and heroism bestowed. There is no glamour in this war, I’m glad you don’t have to understand, but don’t you dare pretend to.

I watched my brother’s head explode from behind, his thoughts and memories, splattered,

crimson saturating the mud around him. No moment of silence can respect that.

“I don’t think I’ll be home for Christmas, my love.” I wrote, with hands shaking and dripping with sweat. No poppies blew in Flanders Fields, that day; gunfire screamed, splitting the air in two; bodies fell, like rain,  echoes of French bombs heard all the way to England.

Mothers wait at ports for sons who sleep like the dead, the dead, forever now. Fireworks, cars backfiring, doors slamming shut, my heartbeat spends most of its time in my throat.

The blotches of red worn on November coats remind me of the green jackets drowning in red.

Do not let this day become mundane, repetitive, an obligation. Do not tell me I left my heart

in the cold shudder of Ypres for nothing. 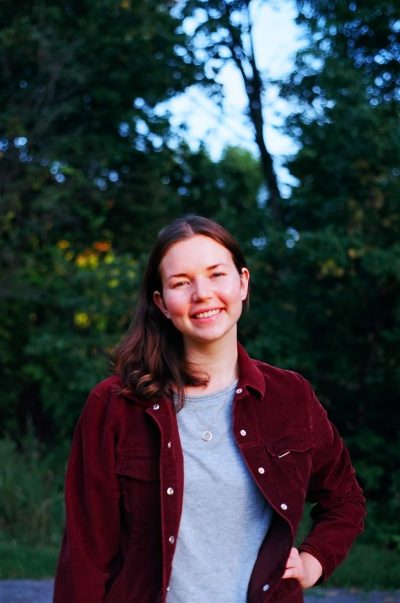 Dana Foley (she/her) is an avid writer, reader, and cupcake-eater studying English at Carleton University. Her dreams include one day owning a dog and… actually, that’s really about it. Following her graduation in 2021 she plans to travel and maybe, just maybe, write a novel.

Change is a Song

Sunlight. Noises of daytime. The trill of a bicycle bell and the familiar sound of cars passing on the street below. Tara rolls over in bed to check the clock. 2:30 p.m.

She’s wet. Why does she feel wet? She looks down to see she spilled a bottle of red wine over herself before blacking out last night. For a minute, she thinks it’s her blood. When she realizes it’s just yellowtail, the relief that should wash over her doesn’t come.

Her body aches as she sits up, but her fingers feel alive.

She picks up her guitar off the floor and heads out to the terrace off the bedroom. The light is blinding. Pain ricochets from her skull to her feet.

When she realizes for the second time that day she isn’t dying, she sits down on a patio chair and moves her fingers across the nylon guitar strings.

She hasn’t played since she was at work. The management team for the NAC Orchestra suggested she take some time off to recover from her…what did they call it? Unfortunate loss.

What did she have besides work? No kids. No husband. Or at least she was sure Jeremey was hunting for a divorce lawyer.

Her playing grows angry. She bends the strings as she picks out notes on the neck. Note after note leaps off her fingers and hang in the air before she strums, loud and fast.

She doesn’t notice, but her song is suddenly accompanied by sweet brassy notes that loop in and out of her strums and lightly kiss her fingerpicked notes. The songs from the two instruments are both one and separate. The notes play together, softly teasing each other.

Tara is not alone. She stops.

There is a woman on the next terrace. She looks seventy-ish and has a trumpet propped on her knee.

“You play beautifully,” she says.

All she can manage is a timid, “Thank you.”

Another silence hangs between them.

The woman smiles. “I used to play professionally. But I’m retired. Play for pleasure now, mostly.”

Tara is self-conscious of the wine stain across her nightgown. But the woman’s smile is warm.

“My father was a trumpeter,” Tara says. “I’ve always wanted to learn.”

“I was good at guitar — and it’s more feminine. It seemed like what I was supposed to do. Why change?”

The woman’s pale eyes glint as her face turns serious. “Life is all about change, my dear. Adapting to change.”

Tara nods. She notices that the woman’s short grey hair is cut in the same way as hers. That they, too, have the same shade of ice-blue eyes. The eyes. Does Tara know them? Yes, Tara suddenly feels like she knows this woman. As if she isn’t looking at another person at all but at her own reflection.

Tara thinks for a moment before responding, “I do.”

“Good. Less people to bother with your playing.”

The woman nods. “Just me and Trumpy.” She pats the trumpet. “He’s my baby.”

The word hits Tara like a blow to the stomach. Suddenly she’s on her feet.

“I have to go,” she mumbles as she staggers inside.

She closes the terrace door and leans against the wall, swallowing grief into her chest.

She remembers the feeling of wetness in her underwear three weeks ago. It was a wetness she instantly recognized, and she ran to the bathroom as frantic sobs escaped her. She pulled down her pants to reveal the growing flower of blood. She moaned. Her fourth red rose.

IVF was their last chance. And she blew it.

Jeremy pounded at the door. Asking what happened. Accusing. Her tears were enough of a confession.

He still had a chance to have a family. Just not with Tara. He left.

Tara sinks to the floor. She wants another bottle of wine to wash away this feeling of being useless. Futile. Broken.

But she doesn’t get up. She thinks of what the woman had said: life is about change. Adapting to change.

She goes to sleep on the floor, hearing those words.

The next morning, Tara wakes up, brushes her teeth for the first time in days, cleans her apartment, and takes a shower.

She calls her management team and tells them she’ll be back next week.

Afterwards, she feels okay, but isn’t sure what to do next. She stands in the kitchen for a moment before grabbing a bottle of yellowtail and slowly stepping out her apartment door to the hallway.

She walks to the trumpet woman’s door. As she knocks, she realizes she doesn’t know the woman’s name. No answer. Tara tries knocking harder but eventually gives up.

She looks at the door, defeated, but spots the superintendent coming towards her.

“Ben,” Tara asks, “Do you know the woman that lives here?”

He looks at the bottle of wine in Tara’s hand and gives her a worried look.

“That apartment’s been vacant for some months, sweetheart.”

Tara is stunned and confused. She watches as Ben continues down the hall.

Her head is foggy as she re-enters her apartment and sets the wine down on the counter.

Vacant for some months? But that’s not possible. She had clearly seen the woman. Spoken to her. She thinks…

Her head hurts. She has to get out. She grabs her purse.

Tara walks idly down the busy streets in her neighbourhood, thinking about Jeremy, the woman, what to do next.

She’s passing a pawnshop when something in the window catches her eye.

Tara stands on the sidewalk for a minute, thinking to herself: Life is about change.