DEPARTMENT OF ENGLISH LANGUAGE AND LITERATURE 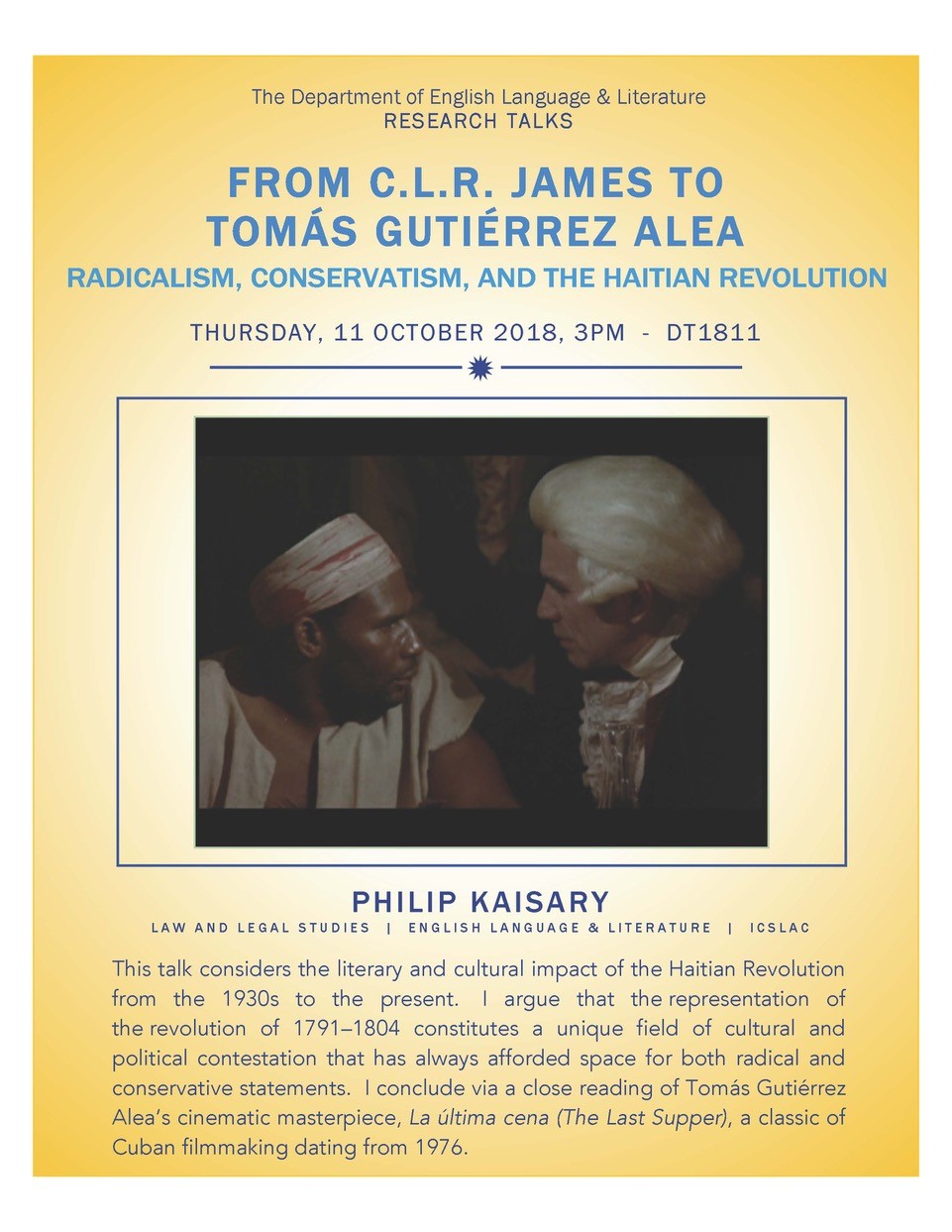 This talk considers the literary and cultural impact of the Haitian Revolution from the 1930s to the present. I argue that we can identify a radical restoration of Haitian history in the works of a key quartet of postcolonial Black Atlantic writers and thinkers – Aimé Césaire, C.L.R. James, Langston Hughes, and René Depestre – as well as in the visual art of the celebrated African American painter, Jacob Lawrence, and the black British artist, Kimathi Donkor. For these writers and artists, the representation of the revolution of 1791–1804 offered the opportunity to articulate a narrative of emancipation in which black agency and universal intent were central. This corpus of radical works forms a contrast with conservative retrievals undertaken by Edouard Glissant, Alejo Carpentier, Derek Walcott, and Madison Smartt Bell; these works, by way of comparison, convey visions of obscurity, tragic circularity, senseless violence, and history as eroticized fantasmics. Dividing these texts along a single axis of distinction, the radical and the conservative, I draw out the situation and ideological thrust of each of the works considered. I conclude via a close reading of Tomás Gutiérrez Alea’s cinematic masterpiece, La última cena, a classic of Cuban filmmaking dating from 1976 that narrates a historically documented episode of slave resistance in late nineteenth century Cuba in relation to the Haitian Revolution. La última cena communicates a radical message of the necessity of revolutionary social transformation and the dissolution by the oppressed of race- and class-based social  hierarchies if the universal human desire for freedom is to be realized. Radical and conservative alike, each text or artwork considered reconfigures the raw materials of history, mapping the political and social reality of the Haitian Revolution via differing aesthetic strategies and innovations, directing an inquiry into narratives from across the Atlantic world that counter the marginalization of the Haitian Revolution and seek to overturn long traditions of colonial and imperialist denigration.

Philip Kaisary is Assistant Professor of Critical Legal, Social, and Political Theory in the Department of Law & Legal Studies, and cross-appointed to the Department of English Language & Literature and the Institute for Comparative Studies in Literature, Art & Culture at Carleton University. His interdisciplinary research elaborates the forms and values of legal, literary, and filmic texts generated by the histories of African descended peoples throughout the Atlantic world.