In 2017, Canada will mark the 25th anniversary of diplomatic relations with the Republic of Belarus. In anticipation of the anniversary, Oleg Kravchenko will discuss the foreign policy of Belarus toward her neighborhood (including Russia, Ukraine, and EU countries) and outline the growing potential of Belarus-Canada relations. 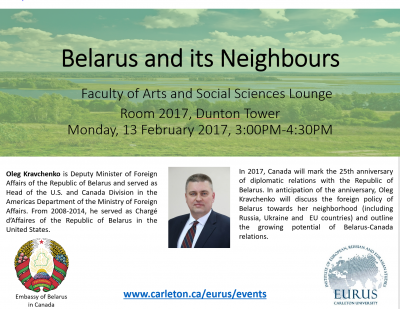 This public lecture is co-hosted by the Institute of European, Russian and Eurasian Studies (EURUS), Centre for Governance and Public Managment (CGPM) and the Embassy of Belarus in Canada .