Nagorno-Karabakh: The View From Brussels and Moscow 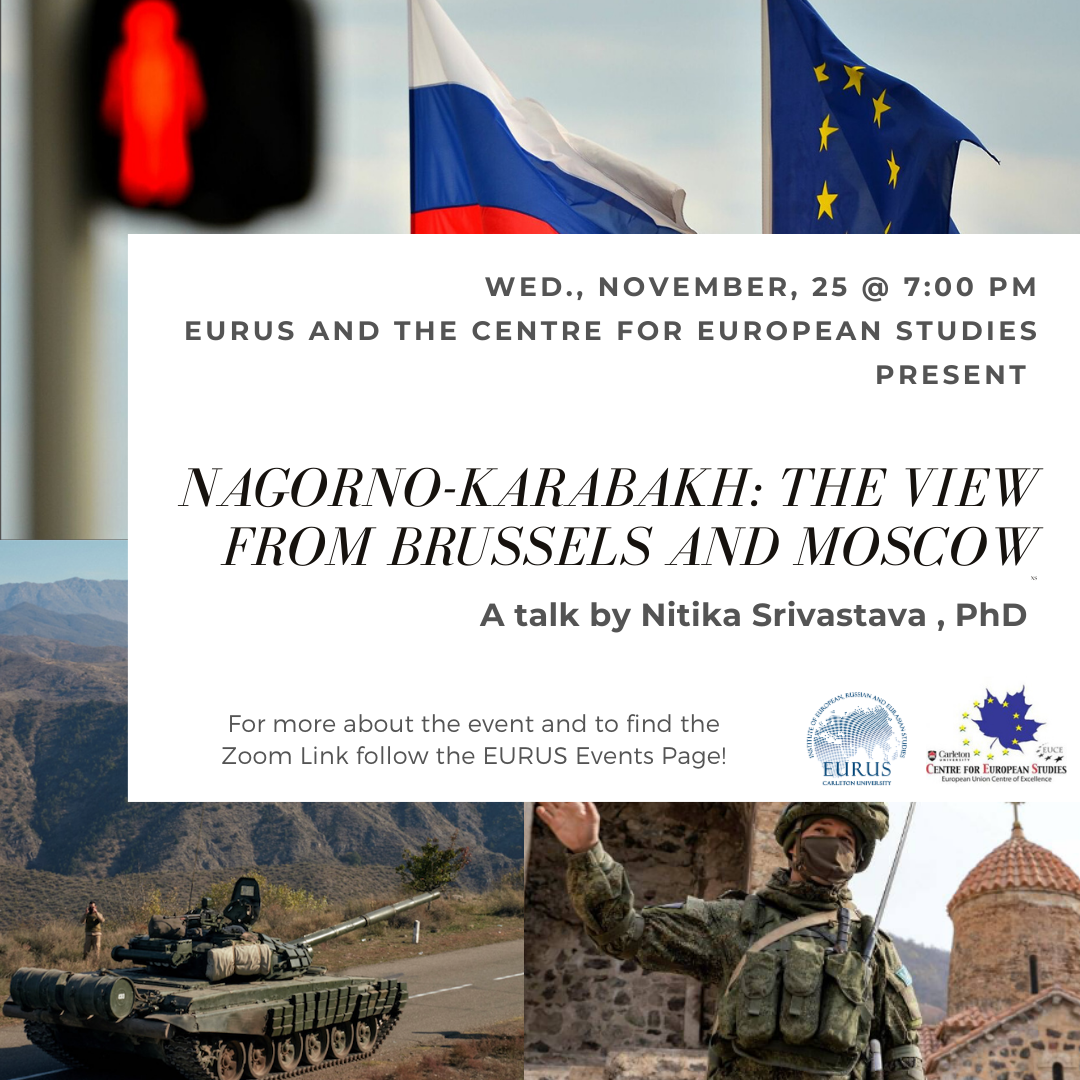 EURUS is excited to host an online talk on “Nagorno-Karabakh: The View From Brussels and Moscow” by Dr. Nitika Srivastava at 7:00 pm on Wednesday, November 25. This presentation will look at the current political relations between the EU and Russia in the wake of the recent conflict in Nagorno-Karabakh. Find the zoom link for the presentation below!

While the world is combatting a pandemic, South Caucasus is indulging in yet another escalation between Armenia and Azerbaijan on the territorial claim of Nagorno-Karabakh. The controversial territory is a small enclave of the Armenian population, located within Azerbaijan and controlled by the Armenian forces. This gave rise to the ethnic tensions since the late 1980s followed by a truce in 1994. Recently, the conflict has escalated again giving rise to geopolitical upheaval in the region.

Armenia and Azerbaijan are situated on an important geostrategic location between Europe and Asia. Apart from having historical importance to Russia, this region especially Azerbaijan is important to the neighbouring countries because of its gas and oil fields which are in the Caspian Sea. For the EU, Azerbaijan’s natural gas is significant for diversifying its dependence on Russian energy resources and ensuring European energy security. Thus, both Armenia and Azerbaijan are part of the EU’s eastern policy and Russia’s “sphere of influence”. Even though both the EU and Russia try to assert their influence, Armenia has remained more inclined towards Russia while Azerbaijan has maintained equal distance from both the actors. Moreover, following the Russian annexation of Crimea in 2014, the bilateral relationship between the EU and Russia are in a deadlock.

The dynamics of the region gets further complicated as the EU and Russia are not the only actors influencing the politics of the region. The involvement of Turkey and Iran in the conflict seems to have complex geopolitical implications. This is particularly because on the one hand, Turkey’s support for Azerbaijan by alleged transfer of fighters from Syria and Libya to Nagorno-Karabakh is adding to its already strained relations with Europe, NATO as well as Russia while on the other hand, Iran’s vulnerable relation with both Turkey and Russia who are supporting opposite sides in the conflict have created difficulties for Tehran. Therefore, looking at this picture, it is imperative to explore if the rift between Armenia and Azerbaijan as well as the geopolitical dynamics of the conflict has any impact on the EU-Russia political relations.

Nitika Srivastava is a Ph.D. in European Studies from the School of International Studies, Jawaharlal Nehru University, New Delhi, India. The title of her thesis is “The Impact of Geopolitics on Political Relations between the European Union and Russia since 1992”. She is a Konrad Adenauer Stiftung Fellow and has worked as International Relations Specialist in the Indian Navy Think Tank.

Topic: Nagorno-Karabakh: The View From Brussels and Moscow