With the support of the History Department, EURUS, the Zelikovitz Centre, ICSLAC and the Centre for Holocaust Education, the Department of History is pleased to host a public lecture with Dr. Helmut Walser Smith on “Kristallnacht: An After History.” The lecturer will address the question of when and how Germans in the Federal Republic thought about and memorialized a central event that had shown Nazi Germany to be a persecuting society.

The November Pogrom of 1938, the Night of Broken Glass, was one of the decisive moments of the history of the Third Reich. For the first time, tens of thousands of ordinary people, if not more, participated in a ritual of violence and degradation directed against their Jewish neighbors. Historians know a great deal about the event. They know less about how this event became part of collective memory in the postwar years.

Dr. Helmut Walser Smith  (Yale, Ph.D., 1992) is the Martha Rivers Ingram Professor of History and Director of the Digital Humanities Center at Vanderbilt University. He is the author of German Nationalism and Religious Conflict 1870-1914 (Princeton, 1995) and four edited volumes, including The Oxford Handbook of Modern German History (Oxford, 2011). His book, The Butcher’s Tale: Murder and Anti-Semitism in a German Town (New York, 2002), received the Fraenkel Prize in Contemporary History, was an L.A. Times NonFiction Book of the Year, and has been translated into French, Dutch, Polish, and German, where it received an accolade as one of the three most innovative works of history published in 2002.

The event is free and open to the public. 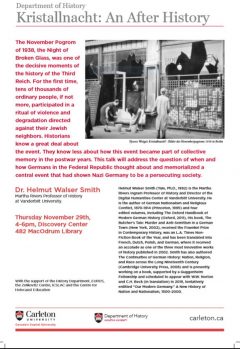