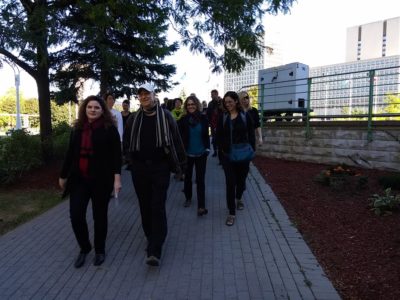 On a bright autumn day this past September, sixty or so members and friends of the Carleton community gathered in front of Ottawa’s City Hall to embark upon an experimental walking tour of our city’s parliamentary precinct. A dozen speakers staged short, five-minute provocations at eight sites of existing, proposed, or future memorialization. Standing on a soap box and speaking into a bull horn, speakers probed the palimpsest nature of Ottawa’s memorial landscape while bearing witness to counter-memories and hidden histories that official sites often obscure.

Our walking tour was part of a broader conversation taking place that weekend which included the opening of the art exhibition “Monuments to the Victims of Liberty” at AXENÉO7 and a symposium at the Université du Québec en Outaouais on the Commons, Counter Monumentality and Decolonization. In response to the Harper government’s controversial (and with the October 19th election of a Liberal majority, indefinitely stalled) proposal for a Memorial to the Victims of Communism, a group of publically engaged academics, artists, and activists from Montreal and Ottawa participated in this constellation of events.

Our intention was to engage history in public, and to engage public history, in a playful, critical, embodied, and interactive way. Traipsing through the symbolic cultural capital of Canada’s capital city, we explored the spatial history of memory practices in Ottawa as represented in memorials to the past, the politics of the present, and proposals for the future. 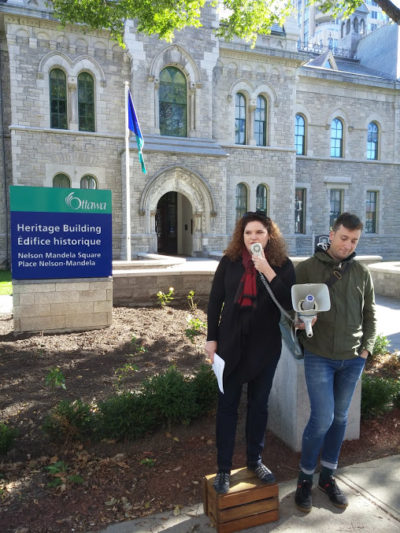 I kicked off the tour with a stop at Nelson Mandela Square. Adjacent to the International Human Rights Monument where the South African leader stood during his 1998 visit to Canada, the square was commemorated in July 2014, a year and a half after Mandela’s death at the age of 95. Officiating the event, Mayor Jim Watson noted that “Mandela was a great leader and humanitarian who devoted his life to the pursuit of democracy and equality.” While few would disagree with this statement, it belies less comfortable truths that are often forgotten: namely that Mandela endorsed the use of violence and was active in the South African Communist Party.

Memorialization relies on selective memory. Monuments are always political and designed to shape values. In importing the figure of Mandela as a human rights defender to Canada, the complexity of his political ideologies and apartheid’s realities have often been flattened. The sanitizing of the history of the struggle against apartheid elides the crucial role of the South African Communist Party (SACP) in both Mandela’s political career and the struggle more broadly. The erasure of the SACP and other Communist orientations in the branding of the South African “miracle” of “reconciliation” and the production of Mandela’s celebrity are part of age-old and hegemonic tendencies to represent comfortable and convenient truths. 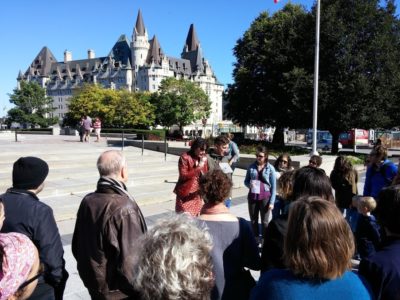 Speaking of hegemonic tendencies, our next stop was the National War Memorial. A popular destination on many tourist itineraries, it is also frequented by many locals, especially on commemorative days throughout the year. Rebecca Schein explained that pilgrimage sites such as Ottawa’s Parliamentary Precinct and the National Mall in Washington, D.C. “compress the geography of the nation into a walkable strip” that constructs a sense of historical continuity. This continuity connects past, present, and future, and asks visitors, “Why are we here, together? Who was here before? Who will be here later?” Seeking to open space for the profane in a site heavily freighted with sacred symbols and meaning, Schein asked group members to resist further sacralizing this site as a result of the recent shooting of Cpl. Nathan Cirillo that took place here, and asked us rather “to hold open space for the profanity of randomness, of mental illness, and of tragedy that is subnational in scale.”

We then walked over to Parliament Hill, to consider the large bronze statue of Emily Murphy, Henrietta Muir Edwards, Louise McKinney, Nellie McClung, and Irene Parlby, better known as “the Famous Five” for their efforts in the late 1920s to advocate that Canadian and British court systems recognize women as persons. Samah Sabrah began by noting her deep ambivalence about the monument. While she is grateful to these women for paving the way for many of the rights she now enjoys she acknowledged, “many of the rights they won were for a limited, namely white and upper-class segment of the population. I also know that their arguments were built on racist and eugenecist foundations.” Citing Emily Murphy’s inflammatory book The Black Candle, which reproduced fears of black men as hypersexual predators who posed a danger to white women’s innocence, Sabrah noted that while fighting for her right to own property and enjoy the full benefits of personhood, Murphy “infantalized women in the service of racist ideals.”

Reflecting on the ways in which the Famous Five’s commitments to rights and equality “extended only to some people at a cost of excluding and criminalizing others,” she invoked another famous five: The Security Certificate Five. “These are five men who, as noncitizens, have been held in custody first in prisons built specifically for them, then on extremely strict bail conditions. They are men whose legal and human rights have been denied. They are noncitizens who are accused of ties to terrorism and whose incarceration is on the basis of evidence that neither they nor their lawyers were allowed to access.” Arguing that legal tools like security certificates are part of broader discourses that work to instill fear of racialized men, Sabrah urged us to think about the ways in which these contemporary manifestations of denied personhood are also a part of the Famous Five’s legacy. 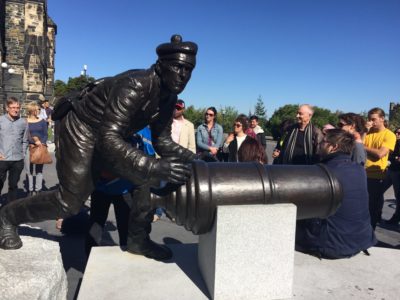 Brian McDougall then directed us to the “Triumph Through Diversity” Monument, erected last year as part of Harper’s $35 million campaign to celebrate Canada’s military accomplishments in the War of 1812. Drawing our attention to the generic First Nations man depicted in the statue, he noted that the only specific Indigenous individual depicted in Ottawa’s official statuary is Mohawk and British ally Joseph Brant. He next identified the first Metis figure to be depicted in statue form in the city, observing that “this generic British colonialism-defending Metis figure, a ‘good Metis’ is easily contrasted with ‘bad Metis’ leaders such as Louis Riel and Gabriel Dumont, who are not commemorated in Ottawa at all.”

Urging us to consider this recent monument within a broader effort by the Harper government “to use a cold-war revival to boost their case for militarism,” McDougall reminded us that in its earliest attempts to establish its militaristic credentials, the Canadian ruling class waged war against the ‘enemy within’: Indigenous Peoples.

In closing, he declared, “Sometime in Canada’s future, when the cold-warriors, businessmen, and defenders of colonialism are no longer in power, statues like this one will be melted down so people can adorn this city with more appropriate commemorations: Parliament Hill will be renamed Penency Hill, after the Algonquin family whose hunting ground this is; Tecumseh will be commemorated for his political and military accomplishments in the effort to defeat colonialism with an appropriate memorial; and Metis leaders like Louis Riel and Gabriel Dumont will be remembered for their vision of an Indigenous homeland free of the worst aspects of Canadian colonialism.” 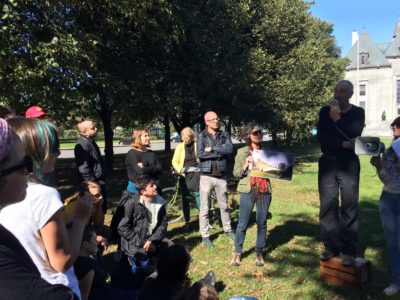 Our next stop was in many ways the lynchpin for the various events of the weekend: the proposed site for the Memorial to the Victims of Communism. Resting on the grass beside the Supreme Court of Canada, we listened as long-time Ottawa architect Barry Padolsky described his protracted battle to halt plans for construction of the memorial. Next, Jennifer Henderson provided context for understanding the aesthetics and meanings associated with the brutalist architecture used by the memorial designers. Redeploying the exposed concrete and massive fortress-like structures “for the remembrance of communism as a historical ‘wrong,’” she argued, “the style announces in its scale and its material and its outmodedness that all communisms, the very idea of communism is passed, and distant, and monstrously inhuman.” Situating the proposal within the broader political context of the (then) Harper government and larger neoliberal project, Henderson argued that it “declares a permanent rejection of the model of social citizenship, of state-guaranteed welfare rights,” and lets us “know that the state is an agent of terror when it is turned to the goal of ‘equality.’”

Expanding on Henderson’s argument about Canada’s selective recognition of the wrongs in its past and its celebration of privatization, Stacy Douglas explored the broader ways in which memorializing practices function to manufacture a sense of collectivity. But she urged skepticism of such projects, rejecting a simplistic equation of representation with democracy in favor of a commitment to “disrupt the ideas of community that animate these institutions as well as the calls for more and better representation within them.”

Winding our way down the hill to the large empty field across from the Canadian War Museum, we stopped along the banks of the Ottawa River where Shady Hafez reflected on the divisive debates taking place around Windmill’s Zibi development project. Located on unceded Algonquin Anishinabe territory, like most of Eastern Ontario and Western Quebec– including Parliament Hill– the controversial project has ignited competing claims to indigeneity, and interference by self proclaimed allies. Hafez argued for the importance of giving Algonquin people the same space for complexity, disagreement, and diversity of interests that other communities are afforded, and urged allies to refrain from judging, co-opting, and speaking on behalf indigenous people. 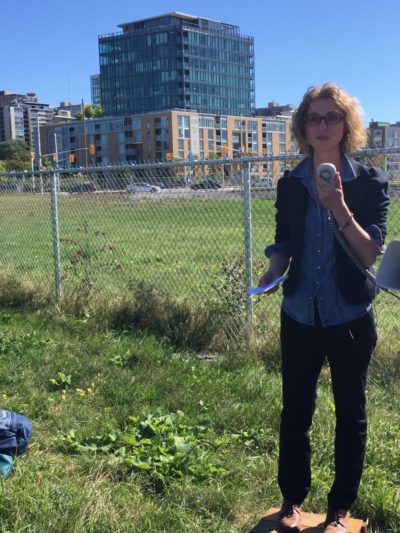 Our next stop was another proposed site: that of the National Holocaust Monument. Nadine Blumer invoked the monument’s dual goal of honouring and mourning the victims of the Holocaust as well as celebrating the survivors who were given a second chance as refugees in Canada. Arguing that the NHM represents a rescripting of history, she noted that of all Western nations, Canada accepted the least amount of Jewish refugees between 1933-45, it turned away the S.S. Louis ship in 1939 carrying 903 Jewish refugees, most of whom were sent to concentration camps upon their return to Europe, and only opened its borders to Jewish refugees in 1948. Blumer also noted that “the NHM’s focus on ‘survivors’ and Canada’s ‘benevolent’ asylum policies mask contemporary restrictions in asylum law, particularly vis-à-vis Syrian asylum seekers today, who are being framed by the media and politicians as carriers of extremist and terrorist ideologies and religious fundamentalism.” 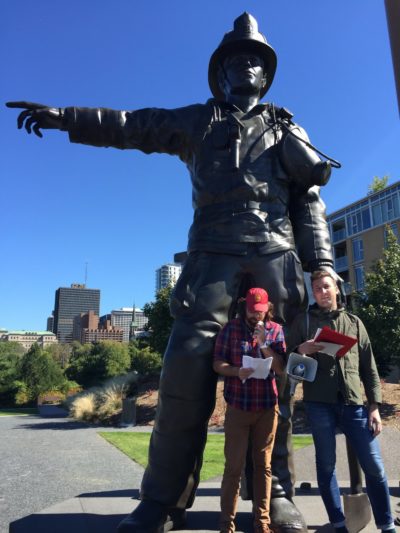 We completed our tour at one of Ottawa’s lesser known sites: Douglas Coupland’s Canadian Firefighters Memorial. Ian Mortimer and David Hugill led us in a thoughtful and at times ludic consideration of Coupland’s intentions in designing this colossal statue. As Hugill observed, the aesthetic of this giant statue of a lantern-jawed, brawny firefighter may be seen as an example of socialist realist monumentality in that it is proletarian, typical, realistic, and partisan. For him, however, Coupland’s reliance on familiar clichés “yielded the tragedy of these people’s demise to the dubious cult of hero worship and sacrificial glory.” Hugill prefers to focus on fallen firefighters as “not so different from ourselves… too fragile, vulnerable, and contingent, just like the rest of us.”

History is always selective. It always represents larger struggles, and always involves the romanticization and simplification of the past. For those interested in scratching below the surface of official narratives and generic forms, a walk through the memorial landscape of Ottawa yields many insights into the unresolved fissures of the past, the competing aims and interests of the present, and the attempts to harness and control the power of the future.

Check out video clips in our evolving digital platform document the Profane Perambulations Walking Tour and on YouTube.