Starting elementary school can be a challenging experience. Many children struggle with the transition, especially in neighbourhoods such as Ottawa’s Centretown, which has a large population of low-income, single-parent and immigrant families.

Stefania Maggi, an epidemiologist and psychologist at Carleton, wants to find out how best to support these kids — and by teaming up with the non-profit Centretown Community Health Centre (CCHC), she has helped develop a program that could foster more parental involvement in the education system in vulnerable neighbourhoods across Canada.

“Academic literature is a big reduction of the real world,” says Maggi, whose Kids in Ottawa Project (KIOP) will be featured at upcoming C2UExpo, a showcase of best practices in community-campus partnerships worldwide, hosted by Carleton from May 26 to 29. “Researchers need to understand the key things you can’t necessarily quantify or count, like the things you feel — the energy, the fear — when you walk into a neighbourhood.”

We know so much already, but we need to do research that’s going to lead to change and action, to refine a policy or launch a program. — Stefania Maggi

After considering a questionnaire approach, Maggi and her collaborators at the CCHC heard from parents who didn’t know much about what their kids did at school, or how they could help ease the adjustment.

Stefania Maggi, an epidemiologist and psychologist at Carleton, wants to find out how best to support kids and has helped develop a program that could foster more parental involvement in the education system.

“A small country like Canada needs all of its institutions and groups to work together,” says conference convenor Edward Jackson, senior research fellow at the Carleton’s Centre for Community Innovation and advisor to the Carleton-led Community First: Impacts of Community Engagement (CFICE) project.

The parents often faced language and cultural barriers — in some countries, you only talk to the teacher if there’s trouble — and many had demanding and inflexible work schedules.

The CCHC piloted a series of weekly summertime workshops where parents learned about activities they could do at home to prepare their children for September, and about the value of relationships with teachers. The health centre now has a template that could be used almost anywhere, and Carleton researchers gained a deeper understanding of how to do meaningful, culturally sensitive work in at-risk communities.

“We know so much already, but we need to do research that’s going to lead to change and action, to refine a policy or launch a program,” says Maggi, explaining how KIOP evolved to become part of the international Kids In Places Initiative, a study of early childhood development and social resilience in three Canadian communities and four in Italy. “With these types of projects, everybody gains, because you’re doing something with an applied value. And it comes from the place that it’s going to be used.”

“We didn’t have the resources, capacity or expertise to do such a large school readiness project on our own,” says Jennifer Theriault, the CCHC’s early years coordinator/health promoter. “It helped us get to know our community better. And if we want to advocate for a specific program or service, we now have information to back up our ideas when talking to funders or our board.”
People are motivated by what Carleton social work professor Karen Schwartz, who will be presenting at the expo, describes as a need to nurture progressive change.

When you blend the knowledge of citizens who intimately know the issues they face with the expertise of researchers and the energy of students, a kind of genius emerges. — Edward Jackson

The C2UExpo, which is being held for the sixth time since the inaugural gathering in Saskatoon in 2003, is an opportunity for people who participate in projects involving community organizations and university or college researchers to share stories and learn from one another.

There will be an array of keynotes and presentations, covering fields ranging from education and child development to entrepreneurship and innovation, gender equality and rural sustainability. Some sectors cluster together naturally — for instance, poverty reduction and social justice — but the 400 or so delegates from a dozen countries can also gain insight and inspiration by cross-pollinating with people who work in completely different areas.

“A small country like Canada needs all of its institutions and groups to work together to produce the most appropriate solutions to the wicked problems we face,” says conference convenor Edward Jackson, senior research fellow at the Carleton’s Centre for Community Innovation and advisor to the Carleton-led Community First: Impacts of Community Engagement (CFICE) project, which aims to maximize the value of community-campus partnerships. “When you blend the knowledge of citizens who intimately know the issues they face with the expertise of researchers and the energy of students, a kind of genius emerges.”

At the expo — which Jackson calls an “idea incubator” — attendees can discover how to “scale up” solutions and how to replicate local projects in other locations. One of the keynote speakers, retired Université du Québec à Montréal economist Michel Lizée, will talk about how he devised a way to help cash-strapped non-profits retain talented employees. His solution to this perennial challenge, a pension fund, has $35 million in assets and nearly 5,000 members in Montreal, and it’s a model that could be adopted in other parts of Canada.

Community-campus partnerships have existed for decades and fit within the wider realm of co-ops and work placements for students. But the approach has shifted slightly in recent years, says Jackson.

The relationships are becoming more reciprocal, with an emphasis on impactful work that breaks through obstacles. Universities are larger and have more resources, but they’re increasingly listening to and learning from their community collaborators. And they’re motivated by what Carleton social work professor Karen Schwartz, who co-leads the CFICE poverty reduction hub and will be presenting at the expo, describes as a need to nurture progressive change.

We believe that schools of social work have a responsibility to leave the ‘ivory tower’ and stay connected to the community. — Karen Schwartz

“Just as social work is committed to social justice and social change, that should be the aim of social work research,” Schwartz writes in Research for Social Justice: A Community-Based Approach, co-authored with Carleton colleague Adje van de Sande.

“We also believe that schools of social work have a responsibility to leave the ‘ivory tower’ and stay connected to the community.” (CFICE, which launched in fall 2012, supported by a $2.5-million, seven-year grant from the Social Sciences and Humanities Research Council of Canada, is one of the funders of the C2UExpo.)

At the expo, Carleton social work master’s student Sandra Eckersley and four classmates will discuss their “A Day In Their Shoes” project, which saw the team collaborate with the Alzheimer Society Lanark Leeds Grenville to help the rural district southwest of Ottawa find ways to become more friendly to people living with dementia.

The students joined the society’s clients on a variety of regular outings — to the mall, choir practice, grocery shopping, curling — and spent time chatting. They learned that when people with early-stage dementia get rides to and reminder calls about appointments, says Eckersley, this “human support” can help them remain active and independent.

Perceptions of people with dementia are also an issue, says Alzheimer Society executive director Louise Noble. They look like anybody else, but their lack of comprehension can make for frustrating interactions with staff at banks and supermarkets. The research project identified a need for more education and awareness in the community. “We would do it again in a minute,” says Noble, “and we already have another collaboration in mind for next year.”

“It was a pretty intense and rewarding experience,” says Eckersley. “It made research a lot more relevant and real than a project in which you simply hand a paper to a professor and get a mark. And we hope it can help the Alzheimer Society.”

The C2UExpo will also include sessions that are open to the public, site visits to the offices of community organizations in Ottawa, and participatory skills-building workshops. “It’s not just about teaching and talking,” says conference coordinator Nicole Bedford. “It’s about making connections and sharing both sides of the story.”

Maize is the most important crop in Malawi. The kernels are dried and ground into flour, which is used to make a porridge-like dish called nsima that some people eat at every meal, accounting for... More 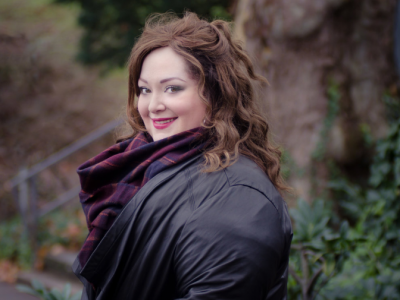 Performer Heidi Melton has been described as “a revelation,” “breathtaking,” “phenomenal,” and even as “magic” by many of the top news and arts publications around the world. The young and rising American dramatic soprano is... More