The 2016-2017 school year is the 40th anniversary of Carleton University’s Film Studies program, and celebrations are already well underway.

On November 9th and 10th, acclaimed Canadian director Atom Egoyan visited Ottawa for two events co-organized by the Film department and the Canadian Film Institute. On the 10th, Egoyan visited Carleton and participated in a dialogue with professors and students, and on the 9th, he sat down for a discussion with CFI executive director and Carleton Adjunct Professor Tom McSorley, where they discussed Egoyan’s storied career. 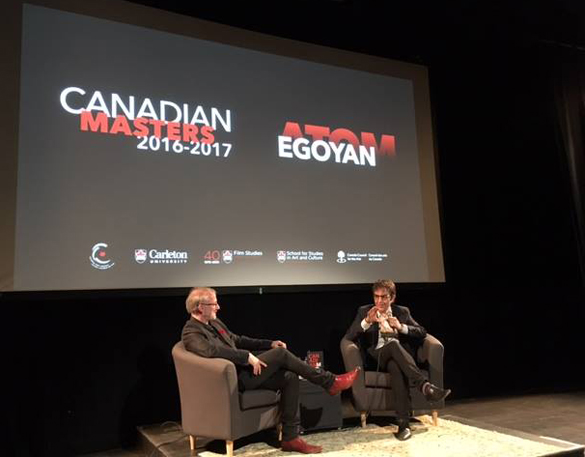 The same night, Associate Professor and Assistant Director of the Film Studies department Marc Furstenau gave some remarks about the 40th anniversary of the program. He highlighted Carleton’s diverse and substantial faculty, with interests ranging from World Cinema, to the philosophy of art, to digital media, gender, film practice and so on.

“The first film studies courses were offered in the Fall of 1976,” Furstenau said. “The Chair of the program in that inaugural year was Chris Faulkner, then in the department of English – and Chris is here tonight, having only recently retired.”

“He, with George McKnight, Peter Harcourt and Patrick McFadden, taught those first courses, building what was to become one of the most important departments of film studies in the country.”

The 2016-2017 celebrations are to commemorate the significance of our program, with alumni moving on to the Ottawa International Animation Festival, SAW Video, film criticism, the Toronto International Film Festival, Library and Archives Canada, the Independent Filmmakers Cooperative, and much more.

The Egoyan events kicked off a new series called Canadian Masters. Groundbreaking Canadian filmmakers Alanis Obomsawin and Guy Maddin will be visiting for similar events in January and March, respectively. More events related to the anniversary will be announced in the coming months as well.

Furstenau also read the description of the Film Studies program from back in 1976, and it was surprising to hear how relevant it remains today.

“Film Studies is an academic discipline concerned with the history, criticism, theory and practice of the cinema both as an art form and as a documentary record record of our time,” the description read. “The cinema is a source of pleasure and knowledge, and its study should form a part of one’s cultural education.”

Furstenau added, “As important a statement now about film study as it was then.”

Despite the many advances in film as a medium and as a scholarly discipline since then, it remains the mass media art of our time and has only become more essential to a full understanding of culture and society.

The anniversary of our distinguished Film Studies program offers an opportunity to recognize not only our own past excellence, but the contributions made by Canadian cinema as a whole and our place in situating that rich film culture, exhibited by people like Egoyan, Obomsawin and Maddin. Join us in paying tribute to the last 40 years, and in looking forward.