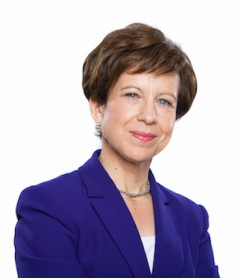 Doucet will deliver the FPA Currents Lecture entitled “A Big World Get Smaller”.

After more than 20 years of living and working in countries such as Syria and Afghanistan, Lyse Doucet rarely hesitates to accept an assignment in the countries most of us avoid.

“These countries resonate for me personally. I know the people and the places,” explains Doucet. “For me, I don’t think of Syria as a war zone because when I first went there, it was a thriving middle class country.”

Doucet also spent five years living in Kabul, and is still in daily contact with friends there.

“I can’t just let it go because if I let it go, I’d be saying that this part of my life doesn’t matter anymore. It’s like saying to an old friend, ‘I don’t like your story anymore because it’s a sad story, a dangerous story’,” explains Doucet. “But there’s always hope. Afghani youth are better educated and more tech savvy than they have ever been. They hold on to hope because if they deny hope, they deny their own future.”

Growing up in New Brunswick, Doucet recalls that international conflicts seemed very far away. Now, she’s writing about the arrival of a humanitarian crisis on European shores—and the difficulties Western countries face in dealing with it.

“The refugee crisis is the worst since World War II. Millions of people are saying their lives are impossible to bear and they’re willing to risk everything to come to Europe,” says Doucet. “It’s unconscionable to allow people to drown at sea, but Europe is really struggling to find the right answer.”

She will share her insights on the Middle East and the humanitarian crisis facing the global community at the FPA Currents Lecture on September 1st .