It included a conference on the future of Canada, lectures from two of our country’s most prominent journalists, and much more.

With more than 3,000 attendees at 35 events, FPA Research Month brought together members of the community, students, alumni and faculty members to learn about and discuss important societal issues, as well as celebrate Carleton University’s 75th anniversary.

“This year, we began with a special event: the Visions for Canada 2042 conference in honour of Carleton’s 75th anniversary,” explains André Plourde, Dean of the Faculty of Public Affairs. “The conference fulfilled our Faculty’s mission of contributing to informed citizenship, building better democracy and better societies.”

The Visions for Canada 2042: Imagining the Canada of the Future conference on March 2–4 featured discussion panels on a number of pressing topics in Canadian society: the environment, Indigenous rights, feminism, politics, migration, and more. Fiona Robinson, a Professor in the Department of Political Science recalls that the room was abuzz with chatter in between the discussion panels.

“The crowd was so diverse. They represented faculty members, students, government, the community and even a high school,” says Professor Robinson, who co-chaired the event with Karen Schwartz, Associate Dean (Research and International) in the Faculty of Public Affairs. “It was great to watch them talking and sharing.”

Minister for the Environment and Climate Change Catherine McKenna speaking at the gala dinner.

Highlights included the film screening of “My Father’s Land”, a film by renowned Inuit filmmaker Zacharias Kunuk; a keynote address by constitutional expert Dr. Kiera Ladner; and a gala dinner featuring a keynote by Minister for the Environment and Climate Change Catherine McKenna.

Another highlight of FPA Research Month was the CU75 POPS: Water competition on March 22. The contest challenged interdisciplinary student teams to find a creative solution to wastewater pollution in Ottawa’s rivers. For instance, the winning graduate team proposed a plan to incentivize low-impact development through a pilot project. Three graduate teams competed in total, with a top prize of $7,500. Four undergraduate teams also competed for the $7,500 top prize. 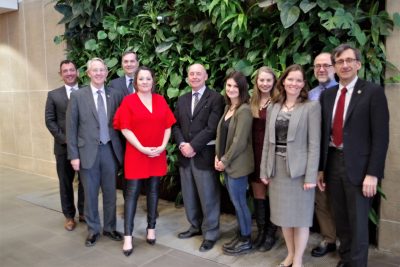 The CBC’s Rosemary Barton poses with members of the Carleton University community before the 2017 Bell Lecture.

It was standing-room only at two of the most prominent lectures during FPA Research Month: The Dick, Ruth and Judy Bell Lecture and the Kesterton Lecture. Peter Mansbridge, the anchor of CBC’s The National, delivered the Kesterton Lecture, which is hosted by the School of Journalism and Communication. Rosemary Barton, the host of CBC’s Power & Politics, delivered The 25th Annual Dick, Ruth and Judy Bell Lecture, which is hosted by the Faculty of Public Affairs. Both spoke about the urgent need for trustworthy, high-quality journalism at this time in history. They each hosted lengthy Q&A sessions, which allowed many students to ask questions.

Research Month also offered graduate students an opportunity to present their research and network with invited academic guests from around the world at one of our many discussion panels. Master’s and PhD candidates in Communication, Political Science, Economics, NPSIA, SPPA, and Law all hosted panel discussions.

Members of the 75 for the 75th: Economists Jeremy Greenwood, Philip Reny and Peter Kuhn.

FPA’s undergraduates also have an opportunity to share their accomplishments during Research Month with the Undergraduate Showcase and the 180HRE competition. More than two dozen students shared poster displays and delivered three-minute synopses about their undergraduate research projects. Topics ranged from First Nations education to the challenges of helping the absolute homeless. 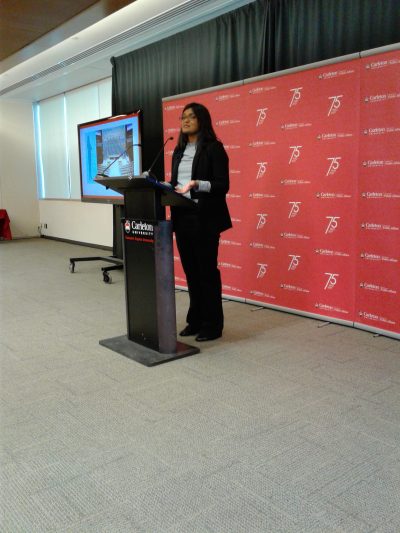 Rumya Nithiananthan delivers her 180HRE. She placed second in the contest and first in the Undergraduate Showcase.

The entire month of events was organized by the Faculty’s Events Coordinator Cassie Smith. She received assistance throughout from the FPA Ambassadors, a team of undergraduate volunteers. Their enthusiasm and help is invaluable as the Faculty of Public Affairs strives to bring all members of our community together: those in the Faculty, within the University, and in the community.