At the end of April 2021, a 322-page report released by Ontario’s Long-Term Care COVID-19 Commission detailed an array of festering challenges—including persistent underfunding, severe staffing shortages, outdated infrastructure and poor oversight—that “contributed to deadly consequences for the province’s most vulnerable citizens during the pandemic.” 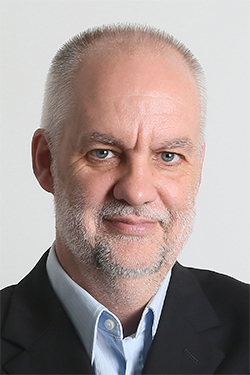 These problems, endemic across Canada in every type of eldercare, are not news to André Picard, the award-winning Globe and Mail health reporter and columnist whose writing has helped keep Canadians informed throughout the biggest public health crisis in a century.

In fact, the Carleton University journalism school alumnus and honorary degree recipient has been covering issues associated with aging since starting at the national newspaper immediately after graduating 34 years ago.

“What lies do we have to tell ourselves to justify how senior citizens are treated?” asks Picard, whose fifth book, Neglected No More: The Urgent Need to Improve the Lives of Canada’s Elders in the Wake of a Pandemic, was published in March.

“We don’t have to make the choices that we’ve been making,” he says. “The state of eldercare is one of the chronic holes in our medicare system, and the number of elders who have died so horribly is the most obvious tragedy that’s occurred because of COVID-19 in Canada.”

Nearly 70 per cent of all deaths in the country during the pandemic have been in nursing homes, according to a recent report from the Canadian Institute for Health Information. The international average is just over 40 per cent.

Despite countless inquiries that have called for eldercare reform, politicians have been “far more eager to order investigations than act on the problems that have been exposed,” Picard writes in Neglected No More, which he describes as a “rough blueprint” for change.