Sviatlana Tsikhanouskaya, the exiled national leader of Belarus, spoke to a packed room at Carleton University on November 21, 2022. The event was hosted by the Institute for European, Russian and Eurasian Studies (EURUS) and the Norman Paterson School of International Affairs. 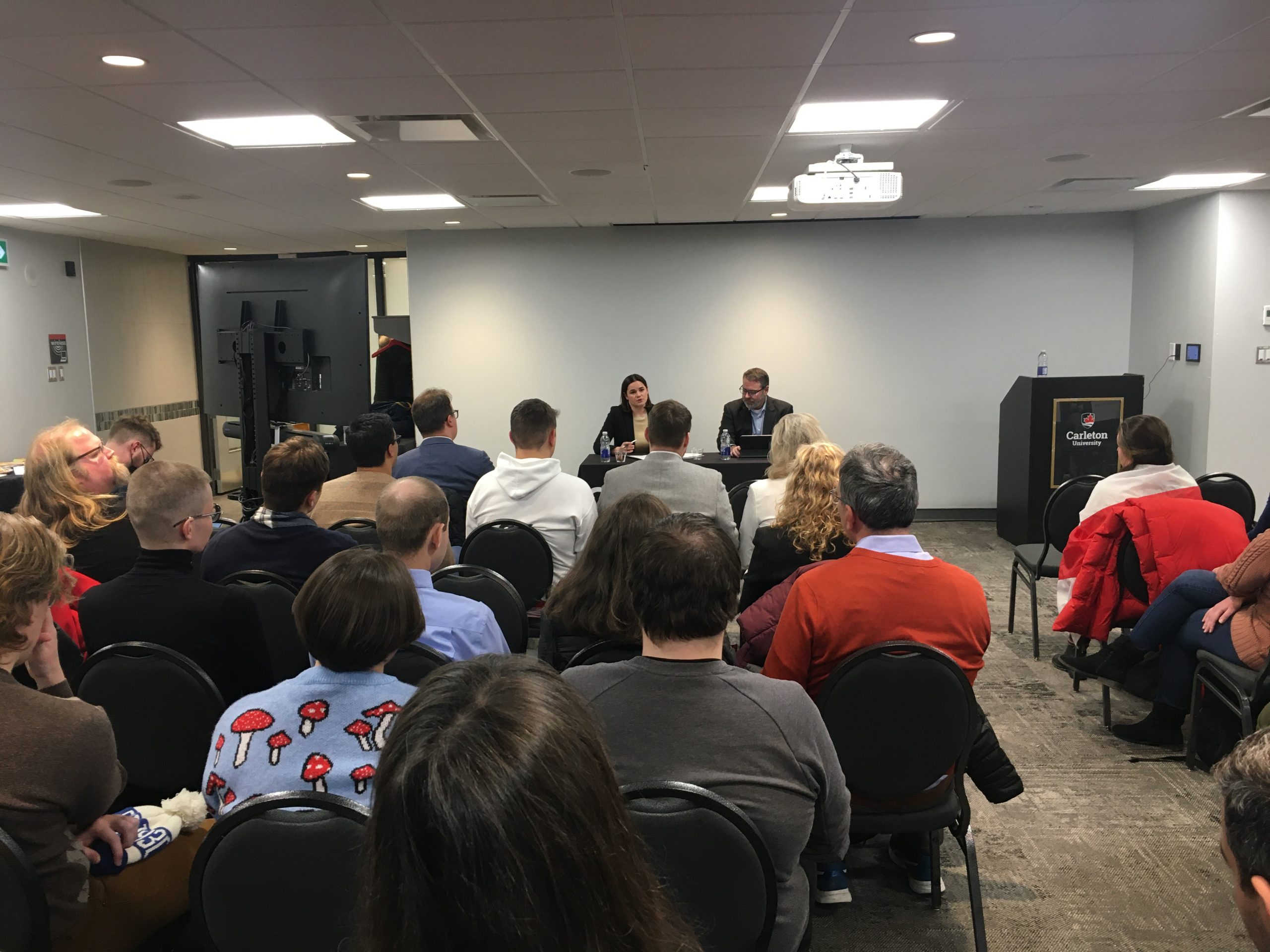 Sviatlana Tsikhanouskaya speaks to an attentive crowd at Carleton University.

The visit came one day before Tsikhanouskaya met with Prime Minister Justin Trudeau, who announced sanctions against Belarus.

Tsikhanouskaya ran in the 2020 Belarusian presidential election as the main opposition candidate after her husband Siarhei Tsikhanouski was arrested for announcing his intention of running against Belarusian President Alexander Lukashenko. When Lukashenka declared himself the winner, Sviatlana Tsikhanouskaya fled the country and created a temporary executive body for Belarus. Her husband was sentenced to 18 years in prison.

Tsikhanouskaya described the oppression faced by the Belarusian people since 1994, when Lukashenka was elected in the country’s last democratic election.

“Throughout his 28 years in power, Lukashenka systematically destroyed democratic institutions and initiatives in Belarus. He dismissed the parliament and usurped power by rewriting the constitution several times and giving himself unlimited powers,” she said.

Thousands have been imprisoned and beaten for confronting the regime. Others, including politicians who challenged the president, disappeared.

“I don’t have doubt that we will win. But I feel sad that our road to freedom was longer than we could have imagined,” said Tsikhanouskaya, who was nominated for the Nobel Peace Prize. “We will continue the struggle and we will never give up but we can’t do it alone. We are asking people to help us in this fight and keep Belarus on the agenda.”

Tsikhanouskaya has travelled to many Western countries to build a “democratic coalition” in support of that fight. She calls for the release of political prisoners in her country and peaceful changes through a free and fair election.

“A free election is my main task. If Belarusians were able to vote freely, I don’t think they would allow another dictator to run their country.”

“Today, Belarus is under de facto occupation and being used as a launching pad for Russian missiles and tanks,” she said. “The media reports that Russia and Belarus are at war with Ukraine. But it is not the people of Belarus: it’s the regime.”

“Ukraine and Belarus have a common enemy — imperialist Russia — and we have to fight together,” said Tsikhanouskaya, who added that 86% of Belarusians oppose the war.

Tsikhanouskaya said she fears that the war will lead to even stronger oppression against Belarusians.

“The very existence of our country is under threat because of the Russian military on our soil. Don’t overlook this threat to independence,” she implored. “Please don’t let Belarus become a consolation prize in this war.”

For more information about the war in Ukraine, visit the information portal on the Institute of European, Russian and Eurasian studies website. The full text of Sviatlana Tsikhanouskaya’s speech is also available.