This event is part of the Visions for Canada, 2042 Conference. You can learn more about the conference and register by visiting the conference webpage.

This screening and accompanying Question and Answer session will provide the audience an opportunity to experience Kunuk and Cohn’s work first-hand and to hear more about their vision for the future the North. The film runs for 163 minutes.

Tickets are now available for $7.50. Advance ticket sales have now closed, but tickets will be for sale at the door.

Mixing scenes from the past and present, My Father’s Land (Attatama Nunanga) looks at the meanings between Inuit history and modern mining in North Baffin Island. It explores how internet and new media can be used to inform and consult Inuit as the Nunavut Impact Review Board (NIRB) holds Final Public Hearings on Baffinland’s Mary River proposal to build the world’s largest iron mine on Inuit land between Igloolik and Pond Inlet.

Read more from the Globe and Mail (Celebrated son of Igloolik creates cultural Internet for his people) and from ISUMA on Digital Indigenous Democracy. 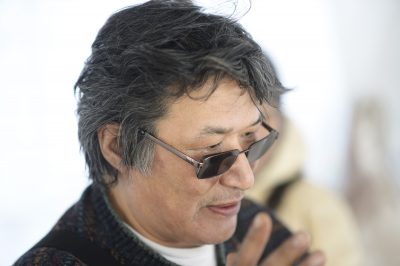 Zacharias Kunuk is a celebrated Inuk producer and director. He is perhaps best known for his film Atanarjuat (The Fast Runner), which was awarded the prestigious Camera d’Or prize at the Cannes Film Festival in 2001. He is the recipient of the National Arts Award, National Aboriginal Achievement Award, and he is also an Officer of the Order of Canada.

His films reflect issues of vital importance to life in Northern Canada, focusing on issues such as Indigenous language preservation, climate change, and the politics of Northern development. In addition to producing and directing a number of feature films, he has created many internet based audio-visual resources designed to provide Inuit with information about issues that affect their lives, while at the same time connecting remote communities with the rest of Canada and the world. For instance, his Digital Indigenous Democracy project uses the Internet, community radio, local television and social media to empower Inuit decision making and community collaboration.

Norman Cohn is a film director and producer, best known for his work on the films Atanarjuat (The Fast Runner), which was awarded the Camera d’Or prize at the 2001 Cannes Film Festival, and The Journals of Knud Rasmussen, the first film to visualize the Christianization of indigenous people from their own point of view. He is also co-founder, with Zacharias Kunuk, Pauloosie Qulitalik, and Paul Apak Angilirq, of Canada’s first Inuit production company, ISUMA. ISUMA was incorporated in January 1990, and aims to produce independent community-based media that preserves and enhances Inuit culture and language while creating jobs and economic development in Igloolik and Nunavut, and telling authentic Inuit stories to Inuit and non-Inuit audiences around the world.

Tickets are now available for $7.50. Advance ticket sales have now closed, but tickets will be for sale at the door.