Author Meets Readers invites Carleton students and the community to join an informal discussion on new books published by members of the Carleton University Faculty of Public Affairs. 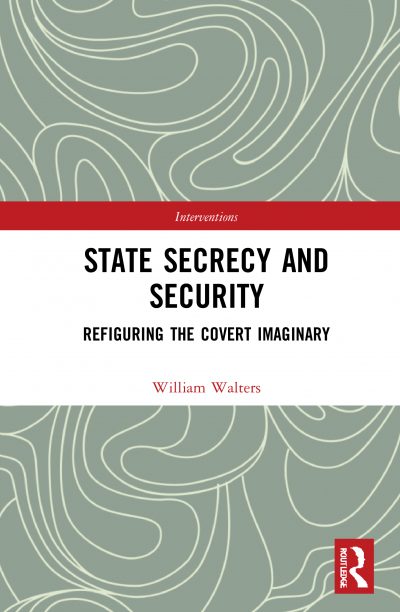 In State Secrecy and Security: Refiguring the Covert Imaginary, William Walters argues for making secrecy more central to critical security studies and a core concept when theorising power in liberal democracies. Through investigations into such themes as the mobility of cryptographic secrets, the power of public inquiries, the connection between secrecy and place-making, and the aesthetics of secrecy within immigration enforcement, Walters challenges commonplace understandings of the covert and develops new concepts, methods and themes for secrecy and security research. Walters identifies the covert imaginary as both a limit on our ability to think politics differently and a ground to develop a richer understanding of power.

William Walters is a Professor of Politics in the Department of Political Science and Department of Sociology & Anthropology, and FPA Research Excellence Chair (2019-22) at Carleton. Walters has published widely in the areas of political sociology, political geography, citizenship studies, security and insecurity, and Foucault studies. Walter’s is currently working on three projects: (1) a SSHRC funded (2017-22) collaborative study of air deportation; (2) a co-edited book (with Charles Heller and Lorenzo Pezzani) called Viapolitics: Borders, Migration and the Power of Locomotion (forthcoming with Duke University Press); and (3) The Handbook on Governmentality for Edward Elgar publishing, which is co-edited with Martina Tazzioli.

Emily Gilbert’s current research revolves around issues related to citizenship, borders, security, economy, nation-states and globalization. Gilbert is particularly interested in the ways that North American geopolitical relations are being reshaped, and how the idea of risk—both economic and social—has been used to discipline behaviour and promote new forms of citizenship. This work also considers the securitization of the region, with a focus on changing border practices and policies. Another aspect of Gilbert’s research addresses the social, cultural and political dimensions of money, from the cultural values inscribed on national currencies, to the proposals for a North American Monetary Union, to general theories of money and exchange.

Phill Miller is an investigative journalist and author of Keenie Meenie: The British Mercenaries Who Got Away With War Crimes (Pluto Press, 2020). He is a staff reporter for Declassified UK, an investigative journalism organisation. Phil has written articles for media outlets such as: The Times, Guardian, Private Eye, Vice, Mail on Sunday, Independent, Irish Times, Daily Record, iNews, Mirror, openDemocracy, Stabroek News (Guyana), Morning Star, New Humanist and New Internationalist.

This event is part of the Ottawa International Writer’s Festival.