Professor Efharis Kostala
Wednesdays and Fridays 2:30-4:00
This course is open to students with second year standing. 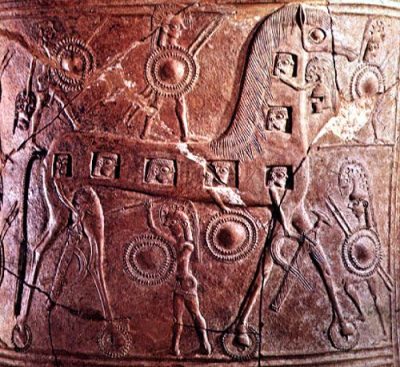 This course will focus on three foundational epics from the western literary tradition organized around the Trojan war and its aftermath. Students will read in full the Iliad and Odyssey of Homer, and the Aeneid of Vergil.  We will consider the importance of the Trojan War in the Greco-Roman culture and identity, the historical and cultural context of the texts and the evolution of the genre of epic. Themes examined throughout the course include the hero and the divine, life and death, love and hate, betrayal and revenge.

CLCV 3202A/HIST 3101A Fall Term:  The Fall of the Republic and the Early Imperial Period

Professor John Serrati
Tuesdays and Thursdays 4:00-5:20
This course is open to GRS and History students with third year standing.

The decades before the fall of the Roman Republic are characterised by political violence, civil war, and the rise of military strongmen.  The period, from the rise of the brothers Gracchus in the 130s BC to the assassination of Julius Caesar in 44, is one of tumultuous political change, and throughout much of this time we are blessed with the writings of Rome’s preeminent lawyer and orator, Marcus Tullius Cicero.  Intellectual, gifted, honest, vain, insecure, and short-sighted are all adjectives that have been used to describe Cicero and his career.  His works present insights, sometimes personal, sometimes propagandist, that allow us to examine this period in far greater detail than we can most.  We shall consider the significance of oratory and the writing of history in the late Republic, and the importance of military leaders such as Caesar and Pompey.  At the conclusion of this course, students should have a greater understanding of the internal problems that revealed the shortcomings of Republican government, and how these eventually led to the Republic’s fall and to the rise of the Principate.  Furthermore, participants in the class should be able to analyse the major events discussed within the course and should have formed their own opinions concerning when the Republic fell, and if this can be dated to one specific event, or was a gradual process.