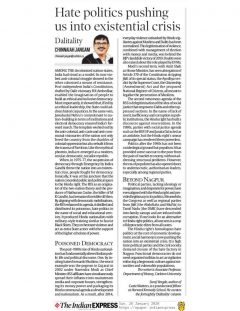 Associate Professor Chinnaiah Jangam writes about the detrimental effects of hate politics in India in a recent article for The Indian Express. A short excerpt follows with the full article, “Hate politics pushing us into existential crisis” available online.

Among the decolonised nation-states, India had stood as a model. Its non-violent anti-colonial struggle showed to the other colonised a means of resistance. Post-independent India’s Constitution, drafted by Dalit visionary B R Ambedkar, enabled the imagination of people to build an ethical and inclusive democracy. Most importantly, it showed that, if led by an ethical leadership, the State could address historic injustices. In the same vein, Jawaharlal Nehru’s commitment to nation-building in terms of institutions and electoral democracy ensured India’s forward march. The template worked out by the anti-colonial, anti-caste and anti-communal visionaries of the nation not only freed the country from the shackles of colonial oppression but also rebuilt it from the trauma of Partition. Like the mythical phoenix, India re-emerged as a modern, secular, democratic, socialist republic.

When, in 1975-77, the suspension of democracy through Emergency by Indira Gandhi threw the nation into an existential crisis, people fought for democracy. Ironically, it was at this juncture that the nation conceded public and political space to the Hindu right. The RSS as an originator of the two-nation theory and the producer of Nathuram Godse, the killer of M K Gandhi, had remained invisible till then. By aligning with democratic mobilisations, the RSS enhanced its agenda, it distilled and distributed its poisonous, hate politics in the name of social and educational services. It produced Hindu nationalists with military-style training similar to fascist Black Shirts. They orchestrate violence and act as extra State actors with the support of the higher echelons of power.