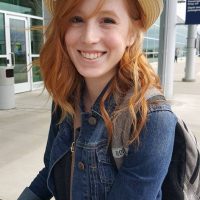 Long, Brittany. “You Shall not Be Deserted”: Death at Passchendaele, the Call for Conscription, and Women’s ‘Right’ to Vote.” Ten Lives by UNT History Honours Students, 2018. http://www.unbgreatwar.ca/brittanys-chapter.html

Between 1939 and 1945, National Socialist Germany mobilized upwards of 500,000 female auxiliaries into the German armed forces. Approximately 3,700 of these auxiliaries participated in, and carried out, systemic violence against Nazi concentration camp victims. My research examines the role of female SS guards in the Nazi state. Female perpetrators within the Third Reich included teachers, nurses, administrative staff, and the wives of Schutzstaffel (SS) officers. Female SS guards, or SS-Aufseherinnen as they were known, were essential to the function and maintenance of women’s camps in the Nazi camp system.

This project will contextualize popular portrayals of SS women after the Second World War to expand our understanding of perpetration. Despite their importance within the women’s camps little scholarly work exists on the SS-Aufseherinnen. Historian Elissa Mailänder’s book, Female SS Guards and Workaday Violence: The Majdanek Concentration Camp, 1942-1944, is the only comprehensive work on female SS guards. Mailänder’s book provides insight that raises significant analytical questions surrounding women’s capacity for violence. My research will take up this question to explore women’s motivations, their experience, and the postwar memorialization of their war efforts. I will challenge notions of female perpetrators as deviant or masculine, and question what this projection says about society’s perceptions of women as perpetrators