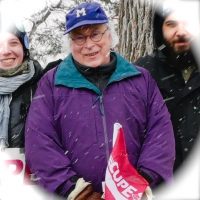 Michael Ostroff was a documentary filmmaker for more than 40 years, beginning as an editor at Crawley Films, Ottawa in 1973.

The later documentaries focus on the history and development of Canada’s cultural voice and have been cited for their political insight, and understated, lyrical tone.

His last feature-length film, “Winds of Heaven Carr, Carvers and The Spirits of the Forest”, has been described by the programmer of the Vancouver International Film Festival as “…one of the best films ever made about our province, these forests, and our history as newcomers.”

Michael began teaching documentary production at Carleton in 2008, and has offered courses in the School of Journalism, the Department of History, and Film Studies.