HIST 3820A: Explorations in Historical Theory – “Youth and History” 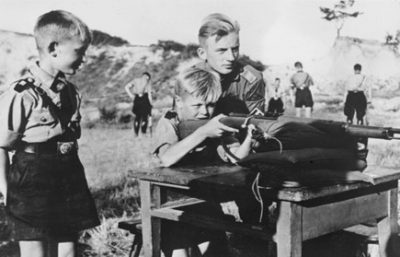 Eleven-year-old boys in the Hitler Youth organization learning how to fire a rifle.
Keystone—Getty Images

HIST 3820 begins in the late nineteenth century, when history began to be taught in universities in the Western World.  The course discusses the ideas and assumptions of the first generations of modern historians and shows how their assumptions and ideas about nationalism, gender, and militarism were passed on to children in nineteenth-century primary schools. HIST 3820 continues by exploring major developments in history writing and thinking during the twentieth century and early twenty-first century. These include the Annales school, the new social history, women’s and gender history, post-colonial history, historical memory and commemoration, cultural history, and global and transnational history.  Students will be asked to read short extracts of important pieces of historical theory or writing in preparation for lecture and to read examples of youth history for their discussion groups.  The topics to be explored during discussion groups will include historical approaches to medieval childhood; youth groups in early modern France; young workers during industrialization; the education of young people in schools (including residential schools), youth groups, and reform schools; young people during the Second World War; a young Parisian woman accused of murdering her parents during the 1930s; and youth activism during the global 1960s.  The emergence of class, gender, age, race, religion, and ethnicity as categories of historical analysis will also be traced and considered.

Students will be graded on their informed participation in weekly discussion groups (25%), their written assignments, and a final exam. Written work will most likely consist of an annotation assignment (5%), a short paper on assigned readings (15%), and a 10-12 (25%) page paper due towards the end of the term.  The final paper will ask students to apply the kinds of skills they have been learning to a book of their choice in youth history. The final exam will probably be worth 30% of the final course grade.

Please note that all readings will be available electronically through ARES.  No purchases are required.

Please contact Professor Whitney (Susan.Whitney@carleton.ca) if you have any questions about the course.