This course examines economic, social, and cultural aspects of diet (food and drink) in Early Modern Europe. Although the grain-based diets of most Europeans changed little during this long period, many others were transformed. New agricultural practices (the agricultural revolution) increased productivity; foods and beverages were introduced from the Americas, Africa and Asia; the industrialization of food production began; the expanding urban middle classes sought greater diversity in their diets; new forms of food preparation emerged, and tastes and food preferences shifted; restaurants as we understand them opened for the first time. In general terms, most Europeans were better fed and enjoyed greater food security at the end of the Early Modern period than they had at the beginning.

Food was complicated. Every item of food was given a value in the humoral system, the dominant way of understanding human health; diets varied by region; bad weather could lead to poor harvests, food shortages, and even famine; eating meat was problematic from moral and religious perspectives; alcohol consumption was often regulated, and men generally disapproved of women’s drinking; some foods and drinks from Africa, Asia, and the Americas (such as potatoes, chocolate, tea, and coffee) were readily accepted, but others were not. 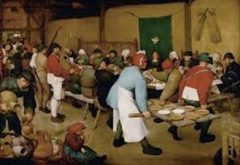 There was no single ‘European’ diet. Although better-off people could afford food and drink produced further away, which allowed them more diversified diets, most Europeans ate what could be produced locally. While grain grew almost everywhere, people in Mediterranean Europe consumed olive oil while those in northern Europe ate dairy products; people living near coasts or major rivers ate fish; Europeans drank wine where grapes could be grown, but beer and spirits elsewhere.

In this course, we will examine the material bases of Europe’s diets (the production and distribution of foodstuffs and beverages), regional and class diets, the rise of gastronomy and restaurants, and the cultural dimensions of eating. We will focus on these questions: Who consumed what, where, when, why, how, and with whom? And what significance did they – and do we – ascribe to their food-related behaviour and beliefs?

These questions lead us to examine a series of issues, including the cultural and religious significance of food; the meanings of ‘plenty’ and ‘dearth’ in popular culture; responses to food shortage; the hierarchy of food and the idea of ‘luxury’ and ‘common’ foods and beverages; modes of food processing and preparation; the meanings and communication of ‘taste’; the etiquettes of consumption; the emergence of gastronomy; the advent of the restaurant and eating out; informal and formal regulation of quality and availability; the relationships of diet, health, and the body; food and drink in cultural and religious writing and art.

Throughout the seminar, we will pay close attention to variations according to age, gender, class, and region, while attempting to generalize about broad trends in Europe’s diets.  We will use a variety of source materials, including secondary works, primary printed works, and images.

This seminar that will meet once a week for three hours. We will all read assigned material before each meeting so that we can have fruitful, informed discussions.

Students will present and comment on one article each term.  In the Winter term, students will give a presentation on the essay they are writing, and the essay itself is the major piece of coursework. Participation in seminar discussions will be evaluated and factored into each student’s final grade.