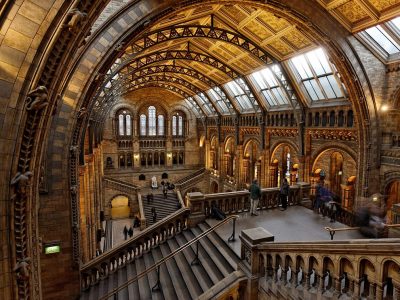 Course Description: Above is an image of the gorgeous Victorian gothic interior of the Natural History Museum, built in London in 1881. You might not think you know anything about Victorian London but think again — it’s the time of Jack the Ripper and Sherlock Holmes. It’s the London Charles Dickens was writing about in A Christmas Carol (1843) and Bram Stoker in Dracula (1897).  It’s from where steampunk draws so much inspiration and it’s the video game playground for our favorite assassins in Assassin’s Creed Syndicate (2015).  Was it really so dark, and dank, and seedy? Absolutely! But there was so much more. In the 1800s, London was the most populous city in the world, zooming from 1 million inhabitants in 1800 to 6 million by 1901. Millions fought for the rights of citizenship amidst cholera epidemics, industrial pollution, and housing crises. Where were the Royals and Parliament? Starvation, crime, and sexual exploitation were rife. And yet it was also a time of miracles – flush toilets! Electricity! Subways! Anything could happen in London and the newspapers were there to sensationalize it all.  We will explore all of this and more, including topics such as cholera epidemics, the Thames river, sewage, and clean water infrastructure; the East End versus the West End; overlapping administrative jurisdictions; the rise of department stores and shopping culture; museums, cemeteries and parks as places of leisure; London as a port-city-center of a vast empire; immigration and racism; the flâneur and the flâneuse, so-called urban wanderers; class and fashion; the Great Exhibition; Chartism and Anglo-African activist William Cuffay; ideas about crime and criminality; the politics of housing, public transport, and mobility; newspapers and print culture; the monarchy; and ideas about gender and sexuality.

The Fall semester will be a weekly blend of asynchronous content (online lecture videos, readings, quizzes) and on-campus, in-person large and small group discussions that will not happen online. Students must physically attend these in-person sessions in order to pass the course. We will follow all university rules about masks and physical distancing etc. that may be in place.

In the Winter, students will pursue their own research topics and evaluate items in our popular culture.

Format: This is a 1.0 credit full-year seminar that will have online elements as well as mandatory, weekly, in-classroom, face-to-face discussion groups. The course will have weekly synchronous elements (discussions that students have to attend in person at a set time) and weekly asynchronous elements (lecture material that students can complete on their own schedules anytime prior to when our discussion section meets).

Evaluation: Participation in small and large group discussions will be important for students looking to do well in this class. Beyond that, small quizzes on readings and lectures, grammar lessons, library assignments, and short to medium length writing exercises will be completed in the Fall term.  In the Winter term, students will complete an oral presentation, an essay, and an original research project on a topic of their choice. That research project could eventuate in a traditional essay or a creative written, visual, musical, digital, fashion, or dance project of some kind.

Readings: Readings for this course have not been set but may include selections from:

Friedrich Engels, The Condition of the Working Class in England

Steven Johnson, The Ghost Map: The Story of London’s Most Terrifying Epidemic- And How it Changed Science, Cities, and the Modern World

Y.S. Lee, The Agency: A Spy in the House

Hallie Rubenhold, The Five: The Untold Lives of the Women Killed by Jack the Ripper