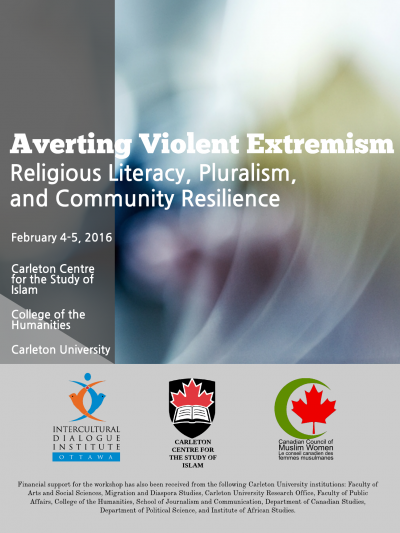 The Carleton Centre for the Study of Islam, in collaboration with the Intercultural Dialogue Institute – Ottawa and the Canadian Council of Muslim Women, hosted a workshop entitled “Averting Violent Extremism: Religious Literacy, Pluralism and Community Resilience” on February 4 and 5, 2016.

The overall goal of the interdisciplinary workshop was to assess the viability of the religious literacy approach in ameliorating the attractiveness of violent extremism for vulnerable youth. It was an interactive event designed to enable broad participation by a large number of knowledgeable and experienced people. This workshop was the first step in forming a network of academics, practitioners, and policymakers to address the issue of averting violent extremism through educational means.Its specific objectives were to:

(i) mobilize knowledge through the synergies of an interdisciplinary workshop of academic experts and practitioners who include individuals with substantial familiarity in, respectively, (a) religious literacy, (b) Muslim history, beliefs, and practices, (c) Muslims in Canada and other Western countries, (c) violent extremism conducted in the name Islam, (d) communication strategies and tactics used by extremist groups such as ISIS, (e) education and curricula on Islam, and (f) building community resilience;

(ii) examine the ways in which Islamic concepts and practices relating to religious pluralism have been obscured in dominant Muslim discourses in the last four decades;

(iii) examine the ideas and debates related to religious literacy produced in the last 15 years; and

(iv) explore the potential contribution that a reinvigorated religious literacy about the history and ideas of Islamic pluralism could make in reducing the vulnerability of Muslims to the messages of groups promoting violence against non-Muslims and Muslim minorities.

Around 100 individuals from academia (from across Canada, one from the UK, and the keynote speaker from Harvard), civil society associations, government (parliamentarians and public service officials), school boards, church groups, and Muslim institutions participated. The workshop was an opportunity to establish a social innovation lead in developing a set of non-military solutions to the global problem of violent extremism and the clash of ignorance.