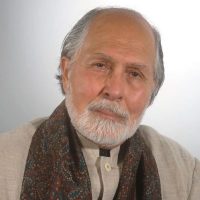 Seyyed Hossein Nasr is University Professor of Islamic Studies at The George Washington University. For over six decades, he has been widely regarded as a leading authority on Islamic philosophy, mysticism, art, and science, as well as religion and ecology and comparative religion. He is the author of over sixty books and five hundred articles, and is the subject of a number of books, articles, and edited collections, including a volume dedicated to his thought in the famous Library of Living Philosophers series entitled The Philosophy of Seyyed Hossein Nasr (2001). Among Professor Nasr’s many influential publications are Science and Civilization in Islam (1968), Knowledge and the Sacred (1989), A Young Muslim’s Guide to the Modern World (1994), Religion and the Order of Nature (1996), Islamic Philosophy from Its Origins to the Present (2007), The Garden of Truth (2007), The Study Quran (2015), and a metaphysical commentary upon the Tao Te Ching in Persian (2021).