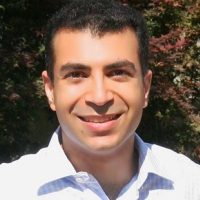 Educated at Harvard and McGill, Professor Shafique N. Virani researches Twelver and Ismaili Shi‘ism, Quranic studies, Islamic history, philosophy, mysticism, and pluralism, and Muslim literatures in Arabic, Persian, and South Asian languages. He has produced books, a documentary film, multimedia, a registered invention, a Unicode Consortium proposal to preserve a disappearing language, entries in the Encyclopaedia of Islam and the Encyclopaedia of Religion, and many peer-reviewed articles, several of which are accessible at Academia.edu or his faculty website.

Dr. Virani’s work has been translated into over 20 languages and has earned funding of over $6 million. The Middle East Studies Association, the Foundation for Iranian Studies, Farabi International, the British Society for Middle East Studies, the Organization of Islamic Cooperation, a Canadian prime minister, and two Iranian presidents have bestowed honors on him. The American Academy of Religion awarded him its highest pedagogical prize, and the University of Toronto appointed him a member of the President’s Teaching Academy. He has also been recognized for the many research and internship opportunities he offers to students.

Professor Virani has served on the faculties of Harvard, Zayed and the University of Toronto, including in senior leadership positions, and received the title of Distinguished Professor of Islamic Studies at the University of Toronto. He is the author of The Ismailis in the Middle Ages: A History of Survival, A Search for Salvation, published by Oxford University Press, and delivered a TEDx Talk entitled “Islamophobia and the Clash of Ignorance.” An avid volunteer around the world, he has consulted for projects by Cirque du Soleil, the History Channel, Lord Cultural Resources, Google, the Unicode Consortium, and many governmental and other organizations. Describing him as “a visionary,” UNESCO honored him for dedicating his efforts “to the cause of extending the frontiers of knowledge and the welfare of humankind.”