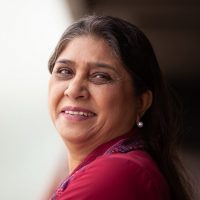 Rehana Hashmi is an human rights defender and activist whose over 30 years of advocacy focuses on protecting women and minorities in Pakistan, her home country.

Born in Khyber Pakhtunkhwa (formerly the North-West Frontier Province) and raised in the province of Balochistan, Hashmi’s advocacy reflects both her roots and life experiences. As a child, Hashmi’s father was jailed for political activism. Inspired by her father’s activism, Hashmi followed in his footsteps, and lead student protests during Pakistan’s 1979 political upheaval. In the years since, Hashmi has continued to work as an advocate, often facing threats because of her advocacy.

In 2019, Rehana Hashmi was appointed as the inaugural Activist in Residence (AiR) in the Department of Law and Legal Studies at Carleton University—a position that is the first of its kind in Canada—where students will benefit firsthand from the field-based knowledge of a human rights activist. Rehana hopes that the Activist in Residence model will be adopted by other Canadian universities so that other human rights defenders can receive much needed support to work without fear of persecution and so they can share their expertise and passion for human rights with students.

As part of the Activist in Residence position, Hashmi teaches the Department of Law and Legal Studies course Advanced Legal Topics: Patriarchy, Human Rights and Informal Justice, and hosts speaking events for women human rights defenders, such as the March 1, 2021 JurisTalk, The Parent’s Circle: A Story of Hope out of Israel and Palestine.

Advocacy, Exile and Hope: An Activists Journey
In the six years preceding her appointment as Activist in Residence, Rehana was forced to relocate to new countries several times to escape threats of violence that she faced in her home country. The threats Rehana faced were directly related to her advocacy for women and minorities in Pakistan and South Asia. Regarding her experience of being under threat and without a safe place to live, Rehana says,

“I was floundering. I was forced to flee my home country, separated from family and friends, cut off from my work, and uncertain of my future due to my experiences in exile.”

Despite enormous losses, Rehana has defiantly maintained her passion and spirit. As the Activist in Residence, Rehana regularly shares her insights and experiences about the advocacy she and her colleagues in Pakistan and neighboring countries have undertaken to support women and minorities in Pakistan and neighboring countries, such as Bangladesh, Sri Lanka, Mauritius, Afghanistan, and Maldives. Rehana is a staunch defender of Pakistani women and minority rights, and  has assisted women human rights defenders in the Netherlands, Sweden, Norway, Turkey, and Afghanistan, to name just a few of her many contributions. Rehana is knowledgeable about international human rights guidelines, instruments and mechanisms and has worked with CIDA, the U.N. and the Aga Khan Foundation.  Rehana’s work has been documented by the University of San Diego’s Women PeaceMakers Program.