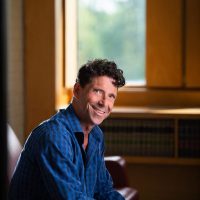 Robert Barsky’s multidisciplinary research combines social justice, human rights, border and refugee studies with literary and artistic insights into the plight of vulnerable migrants. He has published widely, and his books on undocumented migrants, refugees and the milieus of Noam Chomsky and Zellig Harris have been translated into 14 languages. He has also been actively involved in several national and international research projects, supported by the Rockefeller Foundation, the Social Sciences and Humanities Research Council, and the Dutch Royal Academy.

With support from his Canada Research Chair on Law, Narrative and Border Crossing, Barsky is building on the work has done for the past 15 years on a border-crossing journal called AmeriQuests: Narrative, Law and Society, which he started as the Canadian Bicentennial Visiting Professor at Yale. The new an open-access e-journal called Contours will be hosted on MIT’s Media Lab platform, and will focus on artistic representations of border-crossing through a combined exhibition space and academic journal.

His work contributes to efforts to dispel false concordances that link terrorism, “anti-American” behavior and economic hardship with persons deemed “foreign”. Says Barsky: “Hardening rhetoric, militarizing borders and building walls is counter-productive to every sane domestic and international policy,” he says. “We need to combine judicial and policy work with cultural and humanistic efforts, so we can foster a deeper understanding of how central human movement is to a safe and peaceful world.”