A Lecture by Elizabeth Abbott on Leonardo’s Celibacy 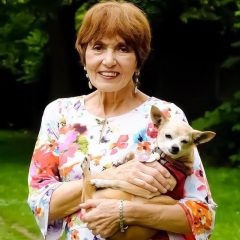 Elizabeth Abbott is a writer and historian with a special interest in the treatment and lives of animals, the environment, and social justice and women’s issues. She has a doctorate from McGill University in 19th century history and is a Senior Research Associate at Trinity College, University of Toronto where from 1991 to 2004 she was Dean of Women. She is the author of several books including the best-selling relationship trilogy A History of Celibacy, A History of Mistresses and A History of Marriage, and Sugar: A Bittersweet History, Haiti: A Shattered Nation, and most recently, Dogs and Underdogs: Finding Happiness at Both Ends of the Leash. She was also the editor-in-chief of Chronicle of Canada, the illustrated history.  She has just finished Shaking the Lion’s Paw: The Trials of Nelson Hackett, a (mostly true) novel about the escaped slave who fled to Canada only to be legally surrendered back to slavery in Arkansas in an egregious miscarriage of justice.

Abbott is currently the Animal Protection Party of Canada’s candidate for Toronto-Danforth in the Oct. 21, 2019 federal election. (https://www.facebook.com/ElizabethAbbottforTorontoDanforth) She is also on the board of a local historical society, and active in a book club and film group.

Abbott will trace this stout-hearted, generous and ambitious genius through some of his life’s watershed events and relationships, and explore aspects of the Renaissance world he lived in and shaped.