“If the heavy eagle can sustain itself by flying in the rarefied air if the big ships with the help of the sails can move into the sea, why shouldn’t the man fly through the air with his wings, ruling the winds and rising up like a winner? “Leonardo Da Vinci 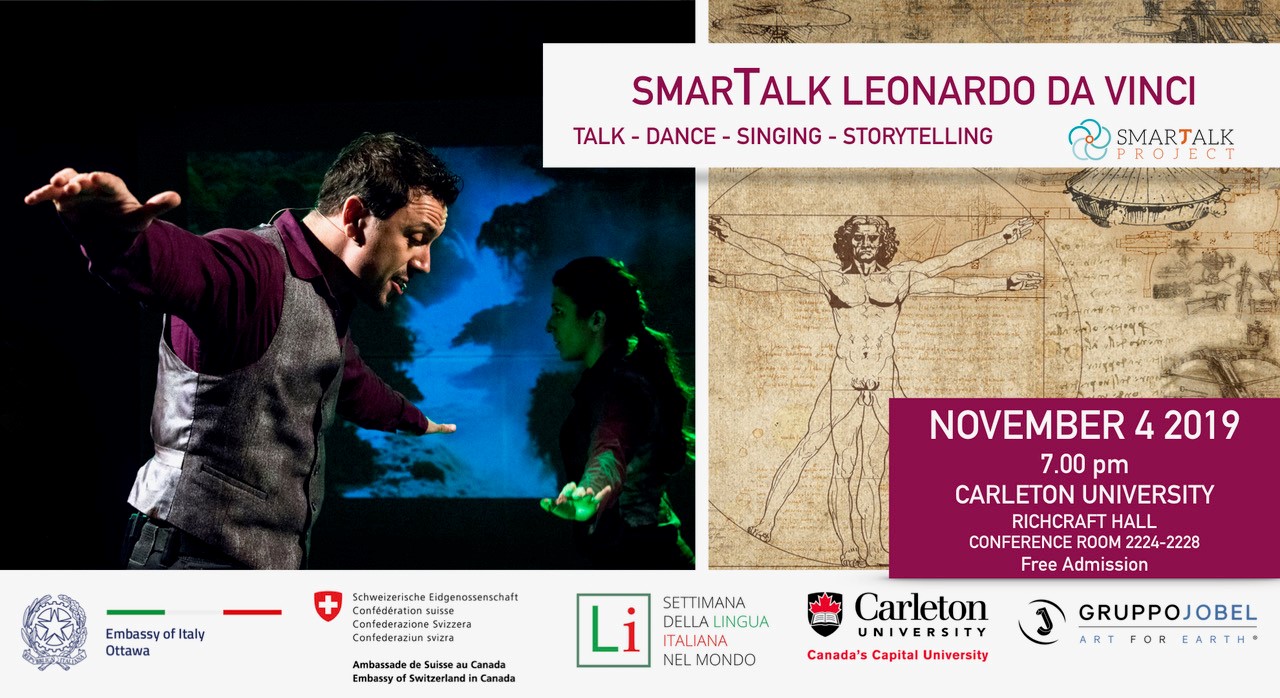 For the first time in Canada, on the occasion of the Italian Language Week in the World 2019 “Italian on the Stage”: the Innovative Format designed by Jobel: SmarTalk.

Leonardo’s captivating and yet mysterious personality is told through the fusion of several disciplines: singing, dancing, storytelling and academic content.  Lorenzo Cognatti, founder and Creative Director of Jobel wanted to paint Leonardo’s complex personality, showing him also as a woman.

The Event will be in English with sections in Italian to hear the Leonardesque language in its original form. Among the Guest speakers Professor Angelo Mingarelli and three performers from Ottawa.

Gruppo Jobel is an international organization, founded in Rome in 1998. Jobel’s mission is to communicate cultural, technical, scientific and commercial content through performing arts, visual arts and new technologies.  On September the 10th 2019, Jobel officially opened the Canadian branch Jobel North America based in Montreal. Jobel North America collaborates with Canadian artists and organizations.  The Innovative Format SmarTalk has already been appreciated internationally at the Forum on Sustainable Development at the United Nations in Bangkok and New York and in numerous events in Italy.

Angelo B. Mingarelli, Ph.D., is Professor of Mathematics at Carleton University, Canada where he’s been an active teacher and researcher for the past 25 years. He is the author of over 100 scientific articles and 6 books, two of which are educational and the rest are research oriented monographs. Prior to joining Carleton, he was Professor of Mathematics at the University of Ottawa for 12 years. As an academic he was President of the Carleton University Academic Staff Association (a certified trade union in Ontario) for three terms and served on its Board for 8 years. As well, he sat as a faculty member on the Carleton University Board of Governors for a three year term. He is currently interested in creating art for sentient AI beings.

H. Masud Taj, award winning Adjunct Professor at Azrieli School of Architecture & Urbanism, delivered the FPA Research Series talk Leonardo Da Vinci: From Baghdad to Bayezid (Oct 1st).  His book Embassy of Liminal Spaces,  interfacing architecture and poetry with thirty-three calligraphic plates, was his second book with calligraphy to be added to Carleton University’s Archives and Research Collections SPC. It was also permanently installed in Canadian Chancery, Bangalore, India and inducted into the Library of Parliament, Canada. His own calligraphy is a cross-cultural fusion of the English Italic hand with Arabic ascenders/descenders, as he is also an exponent of Masonry style that he has presented at the Art University of Isfahan. Last year he went on a two month round-the-world lecture tour, leaving via Atlantic and returning via Pacific, visiting sixteen cities and holding thirteen events pertaining to architecture and poetry, including an exhibition of his calligraphy in Sydney.