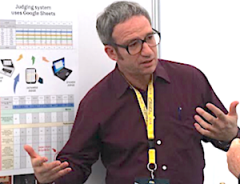 My name’s Mike and I’m the CALL Consulting Analyst here in the School of Linguistics & Language Studies.  This means I support students and their instructors in the use of technology in their language labs and classes.  I also coordinate the activities, events, and general day-to-day running of the Language Learning Resource Centre.

I really enjoy the work I do…like…a lot.  One of my favourite moments of the day is passing by the LLRC and hearing the room buzzing with all sorts of conversations in all sorts of languages.  Shout out to everyone who makes the room such a language-y place to be!

Prior to arriving in Ottawa for graduate school in Applied Language Studies back in 2002, I taught English in Mexico, Vancouver, and Quebec, math and computers at a college in small town BC, and public school in the Vancouver area.  Before that, just to prove that career paths are not always a straight line, I worked in the forest industry! 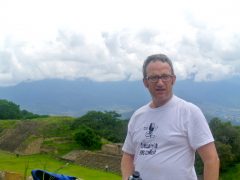 In this photo, you can see me looking SUPER sweaty at the top of the Pyramid of the Sun in Teotihuacán, Mexico in 2017.  It was a great trip and I really got to use my Spanish.  Plus, if you look closely, you’ll be able to see that I am wearing a teeshirt from Linguavision 2017.  Linguavision is a singing competition for language students that we run every year.  Check it out!

Speaking of sweaty pictures, here’s another one…this time from China’s Great Wall.  I spent two weeks there in 2013 with a group of Carleton students and John Nelson from Carleton International. 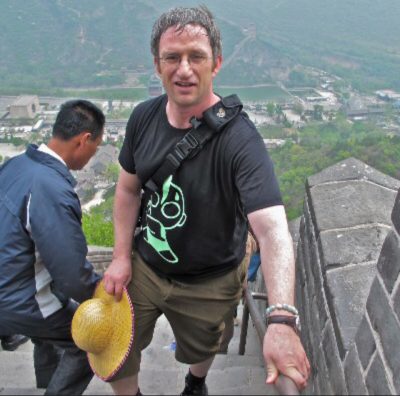 The trip was organized by the Confucius Institute and it was kind of epic.  We landed in Beijing, took a highspeed train to Wuhan, spent a few days there with students at Central China Normal University before traveling west by bus to the Three Gorges Dam.  In addition to all the art, culture, and daily life happenings we got to soak up during the trip and the food (except for the steamed fish), it was super-cool to have a chance to meet up with a few former students who had since moved to China.  Two weeks was just way too short a time to see and experience everything China has to offer.  I only wish I’d gone sooner.