On June 8, 2017, members of the Carleton community gathered to launch the new volume, Post-Soviet Migration and Diasporas: From Global Perspectives to Everyday Practices (Springer-Palgrave 2017) 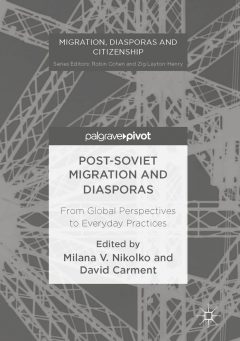 co-edited by Dr. Milana Nikolko and Dr. David Carment. The event brought together young scholars, researchers, and the general public.

“The volume addresses important gaps in diaspora research in three ways. First, the volume focuses on the relationship between post-Soviet societies in transition and  the increasingly important role of their diaspora in both home and host state settings. Second, by taking an interdisciplinary approach to the study of post-Soviet migration experiences, the volume demonstrates the value of field-based and ethnographic research as increasingly important tools in the study of  diaspora.  Thus, the volume is not only concerned with the analysis of identity transformation but questions of methodology as well.”

In her presentation at the book launch, Dr. Nikolko “reflected on the general methodology of the book and ended with a  reference to the future analysis of post-Soviet diasporas, particularly through the prism of the ongoing Ukrainian Crisis. She pointed out a new phenomenon “diasporic wars”  over the symbols of the Soviet past.  These “wars” are taken place mostly in virtual reality, but also echoing throughout home and host countries, defining new lines among communities. In this regard, the book is as diverse as the post-Soviet diasporas and their experiences are.”

The success of the event “reflects an ongoing interest in post-Soviet migration and diaspora research  among academics from different institutions in Europe and North America. This successful academic collaboration started with EURUS, Metropolis, MDS and Magna Foundation support, and culminated  in the production of a volume  from a prestigious publisher in a well-known series on diasporas studies.”

Listen to the interview with participants here.