The Canadian Premiere of the documentary film “Tierra en Casa Ajena” (or Home in a Foreign Land), which explores the root causes that lead Central American migrants to attempt to get to the U.S., the dangers that migrants face during their journeys, and the hope and solidarity that is created among migrants, was held at Carleton on February 8, 2017 at 6:00 PM in Paterson Hall. 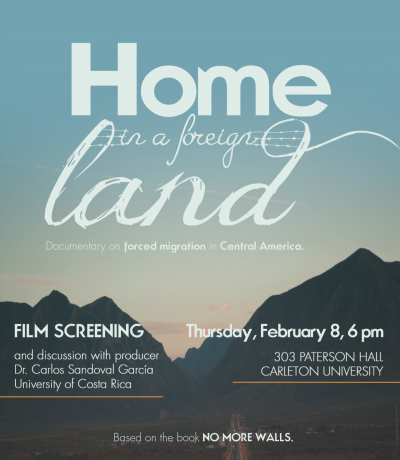 The film’s producer, Dr. Carlos Sandoval García, whose book “Exclusion and Forced Migration in Central America: No More Walls” (Palgrave, 2017) inspired the film will be there to discuss the film. Dr. Sandoval García is a professor of communication studies at the University of Costa Rica.

The event was a great success, with about 30 people attending. Following the film, there was an excellent discussion on the connections between Canadian mining, violence in Central America, and forced migration. Attendees also asked questions about Mexican immigration policy and about the role of the Catholic church in providing support to migrants. We also discussed the issue of organized crime in relation to migrations experiences.

The full documentary is now available on Youtube.com here: