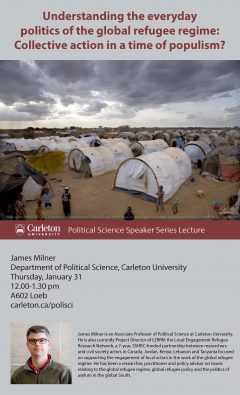 In the aftermath of World War Two, states created a global refugee regime to facilitate collective action to ensure protection for refugees and to find a solution to their plight. Today, the regime seems unable to reliably deliver on this objective: refugees face perilous protection environments in the global North and South, and the average duration of a refugee situation is now 20 years. At first glance, the recent experience of developing a Global Compact on Refugees within the UN system would seem to suggest that the prospect of future cooperation may be further constrained given the rise of populist leadership in states central to the regime’s functioning. Drawing on a more detailed understanding of the development of the Global Compact on Refugees and the early results of a 7-year collaboration with partners in Jordan, Kenya, Lebanon and Tanzania, however, this lecture will argue that a more nuanced understanding of the everyday politics of the global refugee regime, as observed through the making and implementation of global refugee policy, sheds new light on the preconditions for cooperation and collective action This insight raises important questions for the refugee regime and potentially other areas of multilateral cooperation.

James Milner is an Associate Professor of Political Science at Carleton University. He is also currently Project Director of LERRN: the Local Engagement Refugee Research Network, a 7-year, SSHRC-funded partnership between researchers and civil society actors in Canada, Jordan, Kenya, Lebanon and Tanzania focused on supporting the engagement of local actors in the work of the global refugee regime. He has been a researcher, practitioner and policy advisor on issues relating to the global refugee regime, global refugee policy and the politics of asylum in the global South.