Topic – The Elora Singers: from Rehearsal to Recording, from Commissioning to Community 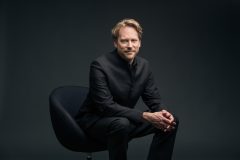 Mark Vuorinen is Artistic Director of both the Grand Philharmonic Choir and Elora Festival and Singers, and Assistant Professor of Music at Conrad Grebel University College, University of Waterloo, where he is responsible for the choral music program. He holds a master’s degree in music from Yale University School of Music and Institute of Sacred Music, and earned the Doctor of Musical Arts degree from University of Toronto.He is past director of the Toronto Chamber Choir, a leading early-music ensemble and has given first performances and Canadian premieres of works by many composers, including John Burge, Timothy Corlis, Robinson McClellan, Tawnie Olson and Jonathon Dove and James Whitbourn.Recent concert highlights include performances of Beethoven’s Missa Solemnis, Benjamin Britten’s War Requiem, Arvo Pärt’s Credo and Passio, John Estacio’s The Houses Stand not Far Apart (co-commissioned by the choir) and Richard Einhorn’s moving soundtrack, Voices of Light, as an accompaniment to the silent film, The Passion of Joan of Arc.A recipient of many awards, Mark was named the E. Stanley Sedar Scholar at Yale University and is a recipient of the Elmer Iseler National Graduate Fellowship in Choral Conducting from the University of Toronto. Mark is a past recipient of the Women’s Musical Club of Toronto Centennial Foundation Graduate Fellowship. He received the David and Marcia Beach Summer Study Award from the University of Toronto for studies in Germany with leading Bach scholar and conductor Helmuth Rilling.  In 2016, Mark received the Leslie Bell Prize for Choral Conducting from the Ontario Arts Council and a National Choral Award (Outstanding Dissertation) from Choral Canada.Mark’s research interests include the study of contemporary choral literature from the Baltic states, and in particular, the music of Arvo Pärt and Veljo Tormis.  Mark was an invited lecturer at the Arvo Pärt Project’s Sounding the Sacred conference in New York City in May 2017.  He is published in Circuit Musiques Contemporaines, the Research Memorandum Series of Chorus America, and Principles of Music Composing of the Lithuanian Academy of Music and Theatre.Mark is a frequent guest conductor, choral adjudicator and clinician, and is president-elect of Choirs Ontario.