CU Jazz Camp 2022 is cancelled due to the ongoing COVID-19 pandemic. We look forward to seeing you next year. 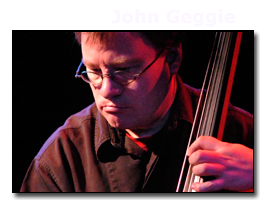 I am a double bass player living in Ottawa, Canada. I play the bass in a wide variety of musical contexts, from classical (orchestral), contemporary and chamber musics all the way to jazz and free music. My classical music work includes concerts with the National Arts Centre Orchestra (Ottawa) and the 13 Strings Chamber Orchestra (Ottawa). I have regularly participated in new music concerts through the Ottawa Chamber Music Festival. In addition, I have been hosting the late night jam sessions at the Ottawa International Jazz Festival for many years. In the area of improvised creative music, I curate and perform in my own series of concerts at the NAC Fourth Stage (Ottawa). I invite creative people from across the spectrum of improvised music to perform with me in a concert-cabaret style setting. These concerts have often been recorded for broadcast by the Canadian Broadcasting Corporation (CBC) and Societé Radio-Canada (SRC). For more information on these concerts, please go to http://www.nac-cna.ca and follow the links to Community Programming. I am also a composer of original music for various contexts. I teach the double bass and improvisation at the Crane School of Music, SUNY Potsdam. I also teach in Ottawa at the University of Ottawa and Carleton University. For more information, visit: http://ma180.org. 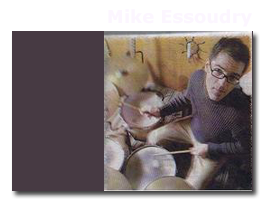 Mike is a sensitive, active and responsive drummer-composer with strong musical intuition. In 2003, he received a Master of Music degree (Jazz Drumset Performance) from McGill University where he studied drumset with Chris McCann, Dave Laing and Michel Lambert. Mike is experienced in many genres of drumset performance from Contemporary Classical percussion to Parade bands to Folk Music to Jazz. He has also recorded in many settings having appeared on both of singer/ songwriter Megan Jerome’s recordings Unlonely (2004), This Uneven Pace (2006), and her upcoming release (2010). As well, Mike released Passage (2009) a recording of his original compositions and arrangements for octet and was launched as a part of the Ottawa International Jazz Festival Concert Series.
More info: www.myspace.com/mikeessoudry 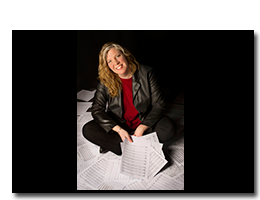 Elise Letourneau is a multiple award-winning composer, an accomplished songwriter, performer, arranger, and educator. She is the director of the Carleton University Vocal Jazz Ensemble, and she maintains an active performance schedule as a solo artist and with The Juliet Singers. She teaches piano, voice, and flute at Alcorn Music Studios. She founded and directed Canada’s first community jazz choir, Capital Vox, as well as Vox Eclectica Women’s Chamber Choir.
An associate composer of the Canadian Music Centre, Letourneau won the prestigious Ruth Watson Henderson composition competition (2011), the Choral Canada (ACCC) composition competition (2012), and the inaugural Diane Loomer award for choral composition. For three years running (2013-2015) she was shortlisted as a finalist for The American Prize in choral composition. Her music has been performed throughout North America, Europe, and the Caribbean, by high-caliber ensembles including the Vancouver Chamber Choir, Canada’s National Youth Choir, the Toronto Children’s Chorus, the Cantiamo Girls’ Choir, and The Juliet Singers.
Letourneau is a graduate of Berklee College of Music (Boston MA), and earned a M.Ed. specializing in creative arts and learning at Lesley College (Cambridge MA).
More info: www.eliseletourneau.com 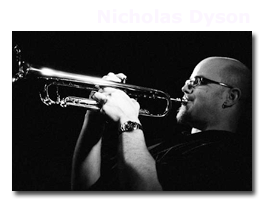 Nicholas is an active trumpet player and educator based in Ottawa. Nicholas performs regularly as lead trumpet with Los Gringos, Impressions In Jazz Orchestra and Solomon Douglas Swingtet, in addition to frequent guest appearances with National Arts Centre Orchestra Pops, Capital Brassworks and SoulJazz Orchestra. Also the founder and director of the Capital Youth Jazz Orchestra program, Nicholas is a dedicated and experienced educator whose passion for the music is contagious with his students.
More info: www.myspace.com/nicholasdyson 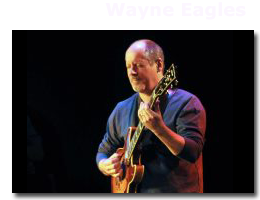 A musician for more than 30 years and a professional guitar instructor for over 20 years, Wayne Eagles performs and records as leader and sideman in a variety of improvisational styles. He has music-related BA, BA Hons, and MA degrees and is an Endorsing Artist for a wide-variety of musical instrument companies. Wayne has performed and/or recorded with artists including Adam Nussbaum, Mike Milligan, Rob Frayne, Ken Rosser, T Bruce Wittet and The Bitches Brew Tribute Band.
Wayne has been a Guitar Performance Instructor at Carleton University’s School for Studies in Art & Culture (SSAC: Music) since September 1992 and Director of their Fusion Ensemble since September 2007. Current projects include trio \ DEF with Montreal bassist Marc-Andre Drouin and NYC-based drummer Ian Froman (alternatively, Boston-based drummer Lee Fish). Prior releases include REGALS – The Double Duo Sessions (TetraArtist-002, 2011; post-production by David Torn) and Milligan-Eagles Project (TetraArtist-001, 2005; Billy Kilson on drums).
More info: http://wayneeagles.com 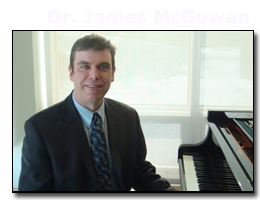 Dr. James McGowan is a professor at Carleton University, and an award-winning educator, jazz pianist, composer, choral conductor, and music theorist. He regularly performs with Modasaurus jazz-fusion quartet, Evensong Ensemble jazz-gospel quintet, Michael Hanna and Friends, and others. As a pianist, he specializes in improvised musics, and has performed in Canada, United States, and Europe. As a scholar, he has published and presented work in jazz music theory and community music leadership, and presented workshops on many forms of improvisation.
More info: www.JamesMcGowan.ca 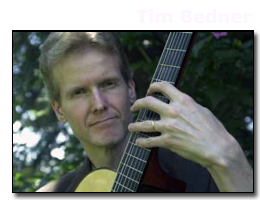 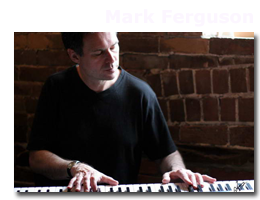 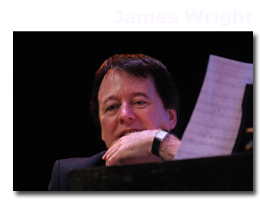 James has pursued a broad-ranging career as a composer, pianist, musicologist, and teacher. In 2002, he received a PhD in music theory from McGill University, where his dissertation on Schoenberg and Wittgenstein was awarded a Governor-General’s Gold Medal, the first time in McGill University’s history that this distinction had been conferred upon a musicologist. His primary scholarly contributions include two books on the life and work of Arnold Schoenberg: Schoenberg, Wittgenstein, and the Vienna Circle (Bern: Verlag Peter Lang. 2006) and Schoenberg’s Chamber Music, Schoenberg’s World (Hillsdale, N.Y.: Pendragon Press, 2009). He serves on the Board of Directors of the Otttawa International Chamber Music Festival, and he is Vice-President of Ottawa New Music Creators, an Ottawa composers collective. An Associate Composer of the Canadian Music Centre, he is widely known as a composer of choral music whose works have been commissioned, performed, and recorded by choirs throughout North America.
James Wright is an Associate Professor of music theory and composition, and Supervisor of Performance Studies, in the School for Studies in Art and Culture (Music), at Carleton University. 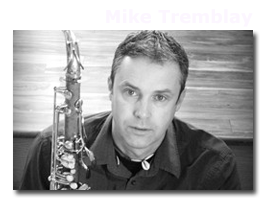 Mike Tremblay is a native of Ottawa with more than 30 years in the music industry as a saxophonist, woodwind specialist, and educator.
He is an associate performance faculty member at Carleton University where he teaches saxophone, ensembles, jazz improvising, and is the co-founder and director of the annual Carleton University Jazz Camp.

He adjudicates for Musicfest Canada and the Kiwanis music Festival. Mike founded and directs the annual Ottawa Saxophone Camp.
Mike frequently performs with the National Arts Centre Orchestra, and many other ensembles around the Ottawa Area, including the Cosmos Saxophone Quartet.  Some of his Performance credits include; Natalie Cole, Alanis Morissette, Lou Rawls, Bernadette Peters, John Pizzarelli,and Aretha Franklin.

Some of his Theatre credits include; The Book of Mormon (International tour), Billy Elliott (International tour),Hairspray ( Charlottetown Festival, PEI ), Oliver (NAC English Theatre),The Producers, The Drowsey Chapperone, and Les Miserables.
Mike released the duo cd “Home” with Mark Ferguson in 2009.  His most recent release is with the Mike Tremblay Trio (with Tim Bedner on Guitar and Ben Heard on Bass)entitled “Live at Gigspace.”
More info: www.MikeTremblay.com 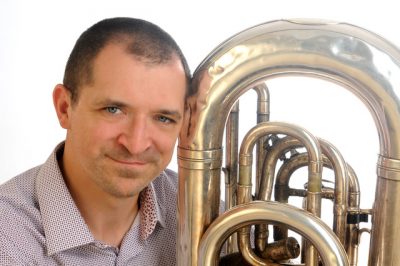 Multi-instrumentalist Keith Hartshorn-Walton relocated to Ottawa in 2015 and has established himself in the City’s Jazz scene specialising in Tuba, Sousaphone, Electric and Acoustic Bass.

Originally from Winnipeg, Keith toured extensively with the Foothills Brass Quintet. He has performed with Clark Terry, Louis Bellson, Quinsin Nachoff, as well as orchestras in Edmonton, Calgary, Oshawa and Kingston. In the spring of 2018 he was part of Rob Frayne’s Dreamband 3 with musicians from Toronto, Ottawa and Montreal.

In Ottawa he can be found in bands as diverse as The Bank Street Bonbons, Safe Low Limit (an all-bass clef jazz group), Linsey Wellman’s Wedding and Funeral Trio, and particularly Mélanie E., a quartet featuring his wife Mélanie Hartshorn-Walton on French Jazz vocals.

As a bassist he has performed with the Beeched Wailers, Alex Moxon, Zakari Frantz, Peter Hum, Stephen Berndt and Steve Boudreau. Keith is also part of two monthly jazz series with Tariq Amery and Garrett Warner at Ottawa’s Art House Café and also has hosted the monthly Jazz in Barrhaven series at Anabia Cupcakery.