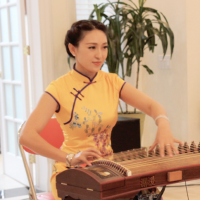 Zichan Yang’s international career as a guzheng performer has seen her perform across North America, China, Japan, and Southeast Asia, in such venues as Canadian Museum of History, National Gallery of Canada, Canadian Museum of Civilization, and Embassy of China in Canada. Newspaper reviews are available on World Journal, Business News Seven Days, Ottawa Chinese Community News, Canada China News, Health Times, and The Ottawa Weekend. An advocate for cross-cultural musical dialogues, she has been invited to lecture on Chinese classical music at various academic institutions, including Queen’s University and Ottawa Elmwood School. She is the guzheng performer and a member of “Greek-Chinese Fusion” band and had composed “Hidden Cove” with George Sapounidis. Performed guzheng in “East Meets West Concert” with such distinguished musicians as David Mott, Jesse Stewart, Kim Chow-Morris, and Shawn Potter. Recent performances have included appearances at the 2017 Canada International Youth Music and Dance Festival and Beyond Festival and cross-cultural collaborations. She also had been selected as an adjudicator for Canada International Youth Music and Dance Festival and regularly participates in the vibrant Ottawa Chinese cultural scene.

Ms. Yang is a graduate of the Shenyang Conservatory of Music, China; her principal mentors were Fan Wu and distinguished professor and performer Nani Yang. She established herself in the Chinese music scene at an early age in 1993, she was selected to host the Children’s Art TV program of the Liaoning Provincial Television Station and had her performances broadcast throughout China. She later participated, as a performance demonstrator, in the production of the official Guzheng Conservatory Level Examination Curriculum DVD, and was an active educator in several music schools in China, including the Arts Institute for Youth. She serves as a member of the overseas board of directors for the Chinese National Folk Instrumental Music Association.

Since moving to Ottawa in 2001, Ms. Yang has become a much sought-after Chinese music educator and international cultural ambassador, initially as the founder of the Tianyi guzheng Studio, and, since 2013, as the co-founder and president of the Zichan International Arts School, which is dedicated to the promotion of Chinese culture, music and arts in the Ottawa area. She is the author of a published Bilingual – Guzheng Pedagogical Textbook and is a registered examination representative of the Central Conservatory of Music. In 2015 and 2016, all of her students have passed the examination examined by the professors from Central Conservatory of Music China. Couple of students got full score and praised by the examiner. In 2017, her students won Gold Award in 2017 Canada International Youth Music and Dance Festival.